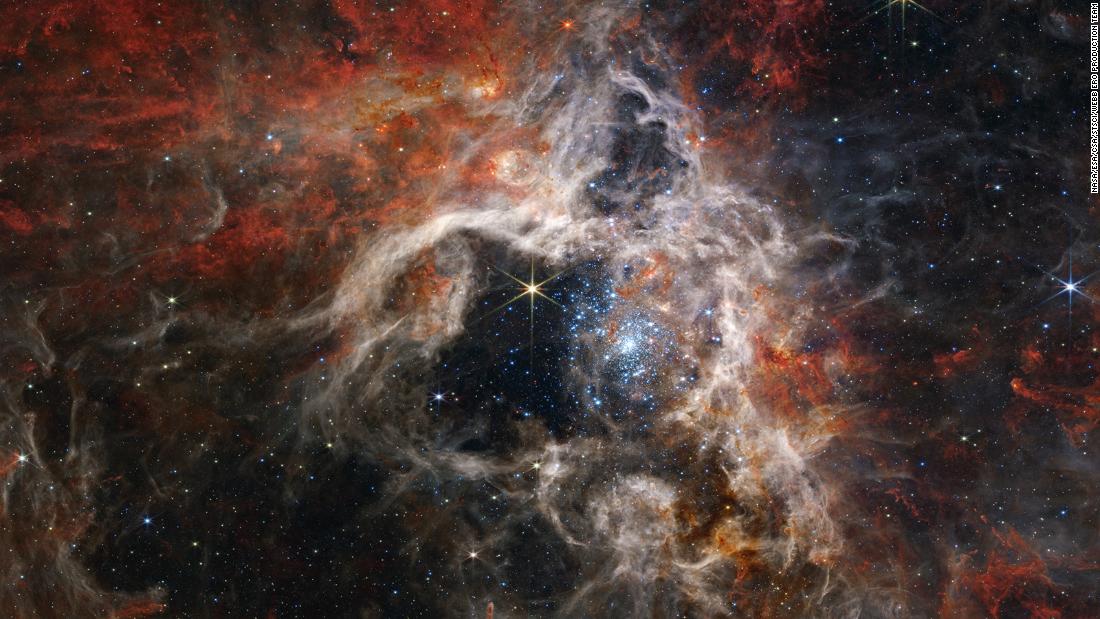 At 161,000 light-years away from Earth in the Large Magellanic Cloud galaxy, the Tarantula Nebula is the nickname for 30 Doradus, the “largest and brightest star-forming region in the Local Group, the galaxies nearest our Milky Way,” according to NASA’s Jet Propulsion Laboratory.

Resembling a burrowing tarantula’s home line with its silk, it houses the hottest and most massive stars known to astronomers, according to NASA.

The Webb telescope’s Near-Infrared Camera, also called NIRCam, has helped researchers see the region “in a new light, including tens of thousands of never-before-seen young stars that were previously shrouded in cosmic dust,” according to NASA.

The densest surrounding areas of the nebula resist erosion by the stars’ strong winds, forming pillars that seem to point back toward the cluster and hold forming protostars.

These protostars emerge from their “dusty cocoons” and help shape the nebula. The Webb telescope’s Near-Infrared Spectrograph (NIRSpec) caught a very young star doing that, which changed astronomers’ previous beliefs about that star.

“Astronomers previously thought this star might be a bit older and already in the process of clearing out a bubble around itself,” according to NASA. “However, NIRSpec showed that the star was only just beginning to emerge from its pillar and still maintained an insulating cloud of dust around itself.

“Without Webb’s high-resolution spectra at infrared wavelengths, this episode of star formation in action could not have been revealed.”

The Tarantula Nebula has long been a focus of astronomers studying star formation because it has a chemical makeup similar to that of the gigantic star-forming regions at the universe’s cosmic noon — when the cosmos was just a feel billion years old and star formation was at its peak, according to NASA.

Since star-forming regions in our galaxy don’t produce stars at the same rate as the Tarantula Nebula and have a different chemical composition, the Tarantula is the closest example of what occurred in the universe as it reached high noon.

Capturing star formation in the Tarantula Nebula is just the latest discovery by NASA’s Webb telescope.

Just a few days ago, NASA released stunning new images produced by the Webb telescope and the Hubble Telescope showcasing the Phantom Galaxy, a spiral of solar systems 32 million light-years away from Earth. The galaxy is located in the constellation Pisces, according to the European Space Agency, which collaborates with NASA on Hubble and Webb.

Webb launched on Christmas Day last year after decades of work to create the world’s largest most sophisticated space telescope.