As wildfires and high temps scorch the West, millions across Nevada and California are asked to reduce their power consumption 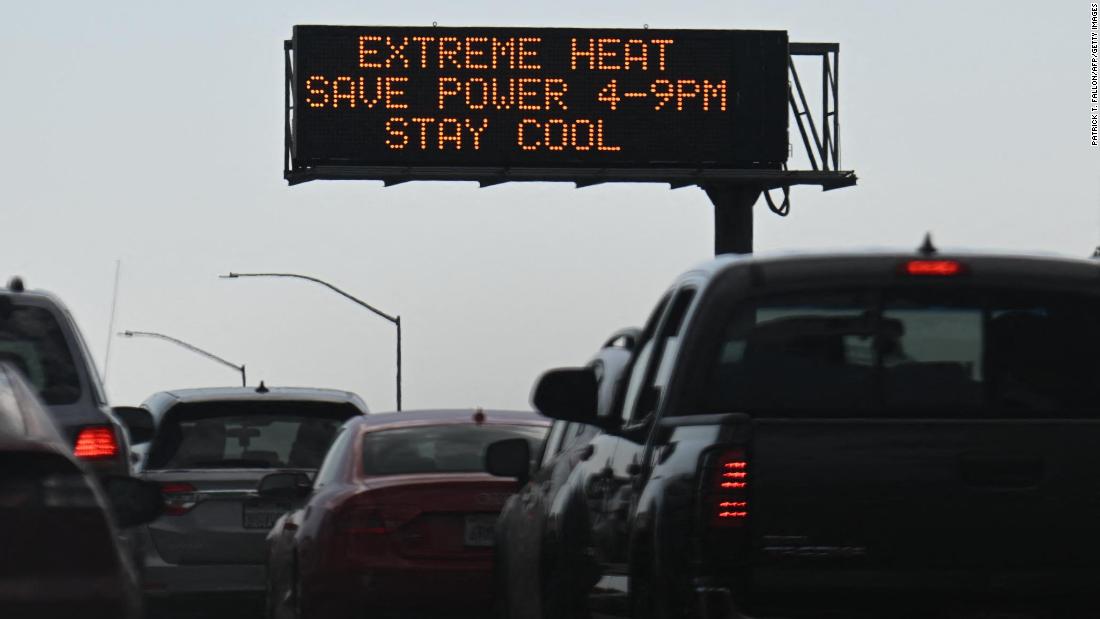 “The abnormally warm airmass will likely tie or break widespread high/low temperature records from the Northern Rockies to the Great Basin and down into southern California this weekend,” the National Weather Service said.

Temperatures are forecast to soar to near 110 degrees on Sunday over interior sections of California while parts of Montana will see high temperatures between 20 and 30 degrees above average on Saturday, according to the weather service.

Power provider NV Energy, which serves more than 1.5 million homes and businesses throughout Nevada, has asked residents to cut back on their electricity use between the hours of 5 p.m. to 8 p.m. to avoid straining the power grid.

The provider also asked residents to avoid using large appliances including dishwashers and washing machines between the hours of 10 a.m. and 8 p.m.

Similarly in California, millions are advised to reduce electricity use between 4 p.m. and 9 p.m. Saturday for the fourth day in a row.

The California Independent System Operator — which manages 80% of the state’s power grid — issued yet another Flex Alert on Friday, asking residents to be mindful of their electricity use.

“With increased heat in the forecast for California and the West, the power grid operator is again expecting high electricity demand throughout Labor Day weekend and into next week, primarily from air conditioning use,” the operator explained.

The operator also asked residents to pre-cool their homes before 4 p.m., set their thermostats to 78 during conservation hours and to avoid charging their electric vehicles.

“This prolonged heat wave will impact the 20 most populous cities on the West Coast, including even coastal locations, like San Francisco and Los Angeles, which often escape the intense heat,” CNN meteorologist Derek Van Dam said.

Weather conditions ripe for creating and fueling wildfires are expected to linger over the western US this weekend, the National Weather Service warned.

“A stubborn area of high pressure will be the driving force behind the dangerous heat, sending highs into the 90s and 100s in many parts of the West,” the weather service said.
Extreme weather events, including heat waves like the current one, have been occurring more often and will continue to be more frequent and intense due to the impacts of human-driven climate change, scientists have warned.

In addition to the state of emergency California Gov. Gavin Newsom declared in response to the heat wave, he also issued another for Siskiyou County in the northern part of the state as crews there battle a raging wildfire.

The Mill Fire had ballooned to nearly 4,000 acres by late Friday after sparking in the afternoon, according to California’s wildfire tracking website. The fast-growing blaze was at 0% containment Friday.

The fire has destroyed houses, caused power outrages and forced residents to flee their homes, the governor’s office said. Injuries to civilians have been reported by officials, though it is unclear how many have been affected.

Crews are also battling the Route Fire, which erupted Wednesday around noon in northern Los Angeles County near Castaic. By Friday evening, it had swelled to more than 5,200 acres with 56% containment, according to CAL FIRE.

“The fire behavior and what you saw (Wednesday) should be a wake-up call to us all about the potential that we’re in and we’re entering into over the next few days in terms of the fire conditions, very rapid fire growth, and very, very explosive fire behavior,” said Angeles National Forest Chief Robert Garcia.

Excessive heat, low humidity as well as steep terrain will be the biggest challenges for firefighters, fire officials said in an update.

The causes of both fires remain under investigation.

One thought on “As wildfires and high temps scorch the West, millions across Nevada and California are asked to reduce their power consumption”