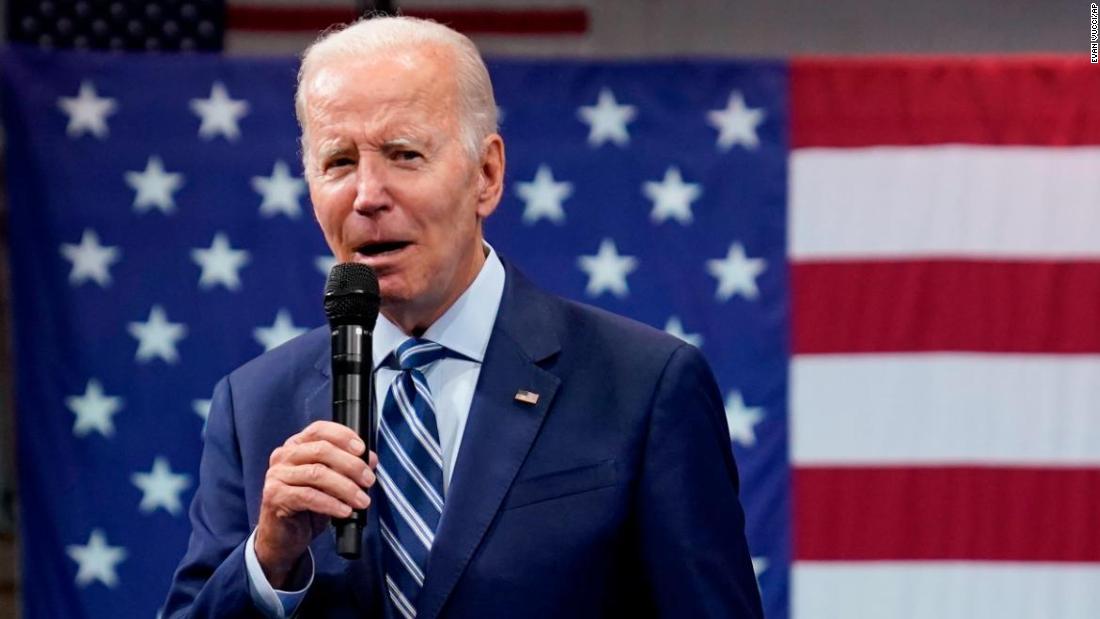 Thursday’s remarks will instead adopt a far graver tone, officials say. After tearing into Republicans for what he calls “MAGA extremism” and “semi-fascism,” administration officials say Biden has determined the time is right to provide a serious, sober reckoning on what he regards as growing anti-democratic forces building across the country.

It remained a constant through high profile speeches in locations rife with historical symbolism, including Warm Springs, Georgia, and Gettysburg, Pennsylvania. The prime-time remarks will be no different, this time with the site of the nation’s revolutionary beginning as the backdrop.

Yet the speech also will serve as an implicit acknowledgment that Biden’s efforts to move past the divisiveness and chaos of former President Donald Trump have been harder than he might have imagined. Trump continues to dominate headlines, especially in recent weeks after federal agents searched his Florida home, revealing an investigation into the former President’s possession of classified documents after he left office. Biden’s speech will take place hours after a court hearing regarding that investigation.

“The way that he sees it, the MAGA Republicans are the most energized part of the Republican Party,” press secretary Karine Jean-Pierre said a day ahead of the speech. “This is an extreme threat to our democracy, to our freedom, to our rights. They just don’t respect the rule of law.”

White House officials emphasized that when Biden warns of the threat to democracy, he is not talking about Republicans as a whole, but those who style themselves after Trump: the “MAGA Republicans,” as the administration has deemed them, referring to Trump’s “Make America Great Again” slogan.

Asked if Biden will name Trump directly, given he is the face of the movement, the senior official said, “This will be a very direct discussion.”

Ahead of the speech, Ronna McDaniel, the chairwoman of the Republican National Committee, said Biden was dividing the nation.

“Joe Biden is the divider-in-chief and epitomizes the current state of the Democrat Party: one of divisiveness, disgust, and hostility towards half the country,” she said in a statement.

Biden has been mulling a thematic speech about American democracy for several months, spurred in part by the revealing hearings convened by the congressional committee investigating the January 6 riot, according to an official. He has also watched with alarm as election deniers running for statewide office have been elevated by Trump and was outraged by the attempted attack on an FBI field office in Cincinnati, Ohio.

“This is a speech the President has been thinking about for a long time. He’s been working on it for a while,” a senior administration official said. “It is not in response to any news of the day. It is a response to what he sees as a moment in this country.”

Biden looks to seize the moment

While Biden underestimated when the “fever will break” when it came to the GOP’s ties to Trump, the last several weeks have brought into sharp focus that many of the campaign pledges that seemed just as unrealistic — from major bipartisan deals to substantial investments in the manufacturing, climate and health care — have, in fact, been signed into law.

The convergence of factors has created a genuine sense inside the West Wing that the political winds are changing just as Americans start to tune in ahead of the midterm elections. It has also had a dramatic effect on the White House itself, where months of intraparty warfare, a resurgent and ever-present Covid-19 pandemic and a myriad of crises many aides viewed as outside of their control appear to have finally turned their way.

Even Biden, who revels in telling the story of the doctor who called him “a congenital optimist,” wasn’t immune from a sense of gloom and occasional doom that hung over the West Wing for months.

“He could get pretty dark,” said one person who spoke regularly to Biden said of his view of things toward the end of his first year in office. “It’s not his way, but there was a period there” when Biden’s mood reflected that of the exhausted country he led.

Yet the shifting winds this summer coincided with Trump’s major re-emergence into the national spotlight. Republican politicians and candidates running entire campaigns based on false claims of fraudulent elections have only become more prevalent.

As the midterm campaign season kicks into high gear, convergence of factors has created an ideal moment for Biden to lay out what has long been on his mind, officials say.

“The President felt that this was an appropriate time before the traditional campaign season begins next week to lay out what he sees at stake, not for any individual political party, but for our democracy itself,” a senior administration official said.

He has been working for several days with his speechwriters on drafts of the 20- to 30-minute address, poring over the precise language and wording. The President typically rehearses his major addresses beforehand and his schedule was clear of public events on Wednesday and Thursday as he prepared.

Biden has delivered only a smattering of speeches in prime-time over the course of his presidency, including his yearly addresses to Congress and remarks on gun violence earlier this summer. Aides said the President felt the topic was serious enough to address the nation in the evening — and ask television networks to interrupt their regular programming.

White House officials have said they want to be selective in when and where to address the issues surrounding the erosion of democracy, even though many party activists have clamored for more sustained focus on the issue. The issue itself is one that consumes much of Biden’s own thinking, those close to him say — something can spill into the public sphere during the rare moments he engages in a substantive way with reporters.

But choosing the right moment to address them on a major national scale, Biden’s team believes, will prevent the issue from becoming rote and routine for voters. Biden, officials note, has had no qualms about that strategy.

On the anniversary of the January 6 Capitol riot, Biden spoke during the day from National Statuary Hall, leveling his most direct attack on Trump for his continued election lies and on Republicans who have amplified them.

In that speech, Biden accused Trump of holding “a dagger at the throat of America, at American democracy,” an extraordinary moment that marked a sharp escalation in his approach to the persistent assertions by Trump that the 2020 election was fraudulent.

At the time, it wasn’t clear whether the new, more aggressive posture toward Trump would herald a sustained shift in his approach toward the de-facto leader of the Republican Party. Biden did not repeat his criticisms of Trump on a regular basis until recently, as he began his efforts to elect Democrats in the upcoming midterm elections.

“The MAGA Republicans don’t just threaten our personal rights and economic security, they’re a threat to our very democracy,” he said last week at a Democratic political rally in Maryland. “They refuse to accept the will of the people. They embrace political violence. They don’t believe in democracy.”

A few days later, Biden used an official event in Wilkes-Barre, Pennsylvania, to chastise South Carolina Sen. Lindsey Graham, a Republican he once called his friend, for suggesting there could be riots in the street if Trump is prosecuted by the Justice Department.

“Where the hell are we?” Biden intoned.

The movement toward Trump by Graham and other Republicans whom Biden has known well for years has disappointed and unsettled Biden more than most dynamics in Washington.

A senior adviser said Biden “goes darkest” when he sees former establishment Republicans “behave badly” and associate themselves with the worst elements of Trump’s political brand.

The newly aggressive rhetoric has drawn howls of protest from Republicans. When he accused followers of Trump of “semi-fascism” at a fundraiser last week, the response was swift.

At least one Democrat in a tight reelection race also distanced herself from Biden’s remark; Sen. Maggie Hassan of New Hampshire said Biden “painted with way too broad a brush” when he uttered the comment.

White House officials have given no ground when asked about the criticism — and neither has Biden. But officials say Biden will make clear his target is not the Republican Party, or conservatives generally.

“He will talk very clearly and about Democrats, independents and mainstream Republicans who he believes are united in our belief in democracy and in our willingness to defend democracy,” the senior administration official said. “But he will talk about these direct threats to democracy from MAGA Republicans and the extremism that is a threat right now to our democratic values.”

While officials describe Biden’s message as urgent, it remains to be seen whether voters facing high prices and an uncertain economy will respond to his warnings about the state of democracy.

Yet recent polls have shown concerns about democracy rising among voters. An NBC poll conducted in August found “threats to democracy” rose to the No. 1 issue facing the country, surpassing “cost of living.” And a Quinnipiac University poll released Wednesday found 67% of respondents think the nation’s democracy is in danger of collapse, a 9-point increase from January.

Unplanned — but not entirely unwelcome — for the White House has been the ongoing developments over Trump’s handling of classified documents at his Mar-a-Lago estate, a matter the White House has officially kept at arm’s length to avoid the appearance of politicization.

Still, the reminder to voters of the chaos that surrounded Trump’s presidency has been privately gratifying to some Democrats, who believe it presents a stark contrast to Biden’s way of doing business.

“It’s like the chaos was memory-holed because of the 50 million other things going on,” one Democratic official with close ties to the White House said.

Biden “will never make it about Trump alone — he views it as so much bigger than that and probably, to some degree, beneath him,” the official said. “But I think most in our party appreciate the very clear contrast now that he’s back in the headlines.”