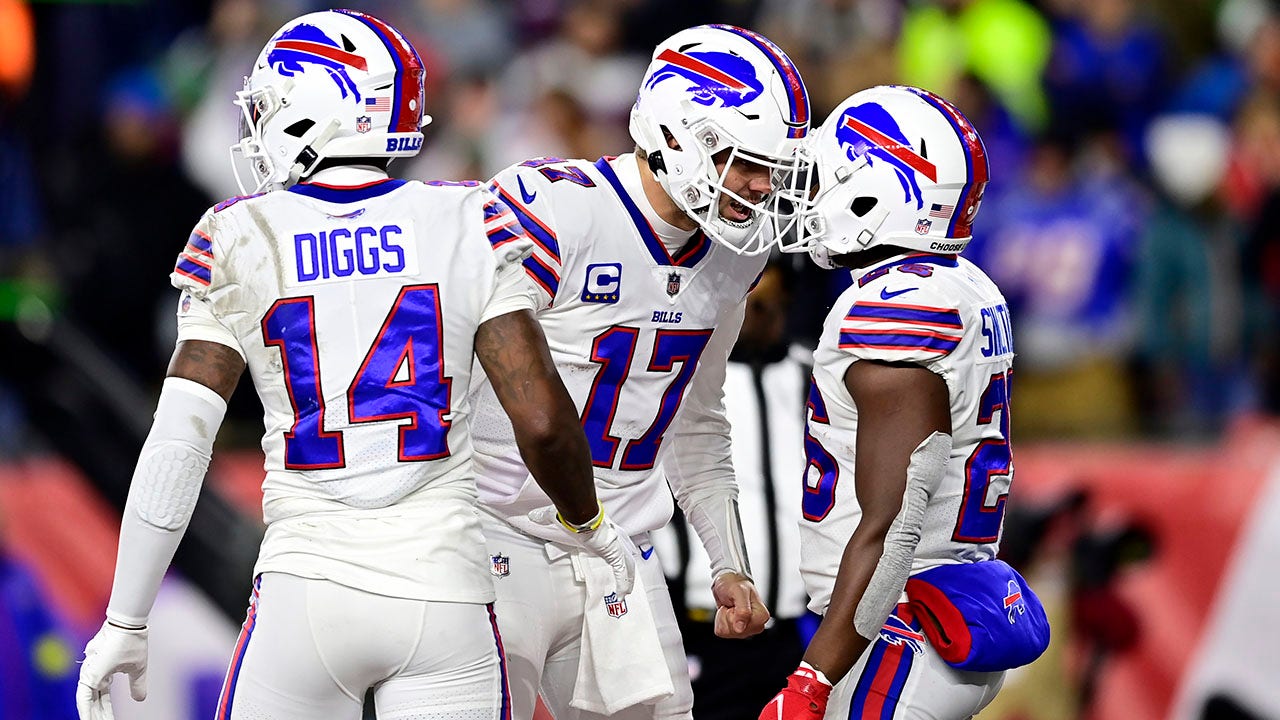 After dropping two straight games, it seems like the Buffalo Bills are starting to get back on track.

Sure, even last week’s win against the Detroit Lions was scary, but it’s not three wins in a row for the Bills after Thursday’s 24-10 win over the New England Patriots.

Buffalo didn’t exactly light it up offensively like we all know, but luckily for them, the Pats’ offense was as sluggish as it’s been all season long.

But that’s pretty standard for “Thursday Night Football” in 2022.

Quarterback Josh Allen #17 celebrates with running back Devin Singletary #26 of the Buffalo Bills after Singletary rushed for a fourth quarter touchdown against the New England Patriots at Gillette Stadium on December 01, 2022 in Foxborough, Massachusetts.
(Billie Weiss/Getty Images)

After the Patriots started the game with a three-and-out, the Bills knocked in a field goal, but New England responded with a 48-yard catch-and-run by Marcus Jones to take a 7-3 lead. Oh, and by the way, Jones is a cornerback who mostly plays on special teams as a returner.

Things returned back to normal on the Bills’ next drive though, as Stefon Diggs caught an eight-yard touchdown to give the Bills a three-point lead at the beginning of the second quarter. After forcing another punt, the Bills went on a slow but steady drive, going just 56 yards on 14 plays – but it ended with another eight-yard score, this one by Gabe Davis, and the Bills were up 17-7.

The Pats still couldn’t do much of anything on offense – they again went three-and-out on their next two drives. But they were able to recover Josh Allen fumble inside the two-minute warning. They got into field goal range for a sign of life, but Nick Folk’s field goal doinked off the crossbar from just 48 yards – replay showed he hit it fat, just like all of us with our irons on the golf course. The Pats went into the locker room down 10.

Wide receiver Stefon Diggs #14 of the Buffalo Bills catches a first half touchdown pass in front of cornerback Jonathan Jones #31 of the New England Patriots at Gillette Stadium on December 01, 2022 in Foxborough, Massachusetts.
(Billie Weiss/Getty Images)

PATRIOTS USE SURPRISING PLAYER TO SCORE FIRST TOUCHDOWN VS. BILLS

Both squads traded zeros in the third quarter, but the Bills went on a long drive that went into the fourth quarter and ended with a one-yard score from Devin Singletary, making it a 24-7 Bills lead.

Diggs led all receivers with seven catches for 92 yards and his score, while Allen finished with 223 yards through the air, completing 22 of his 33 passes. This also was a bit of a coming out party for rookie James Cook, who had 14 carries for 64 yards as well as six catches for 41 yards.

Mac Jones, though, threw for just 195 yards – 68 of them came on the Pats final drive of the game, essentially in garbage time.

Quarterback Josh Allen #17 of the Buffalo Bills drops back to pass in the first quarter against the New England Patriots at Gillette Stadium on December 01, 2022 in Foxborough, Massachusetts.
( Billie Weiss/Getty Images)

The Bills will host the Jets in Week 14, and a Dolphins loss this weekend will put them in first place in the division. The Pats, now 6-6, will head to Arizona for Monday Night Football.