Blind Michigan judge drives race car — and inspires others to follow their dreams, too 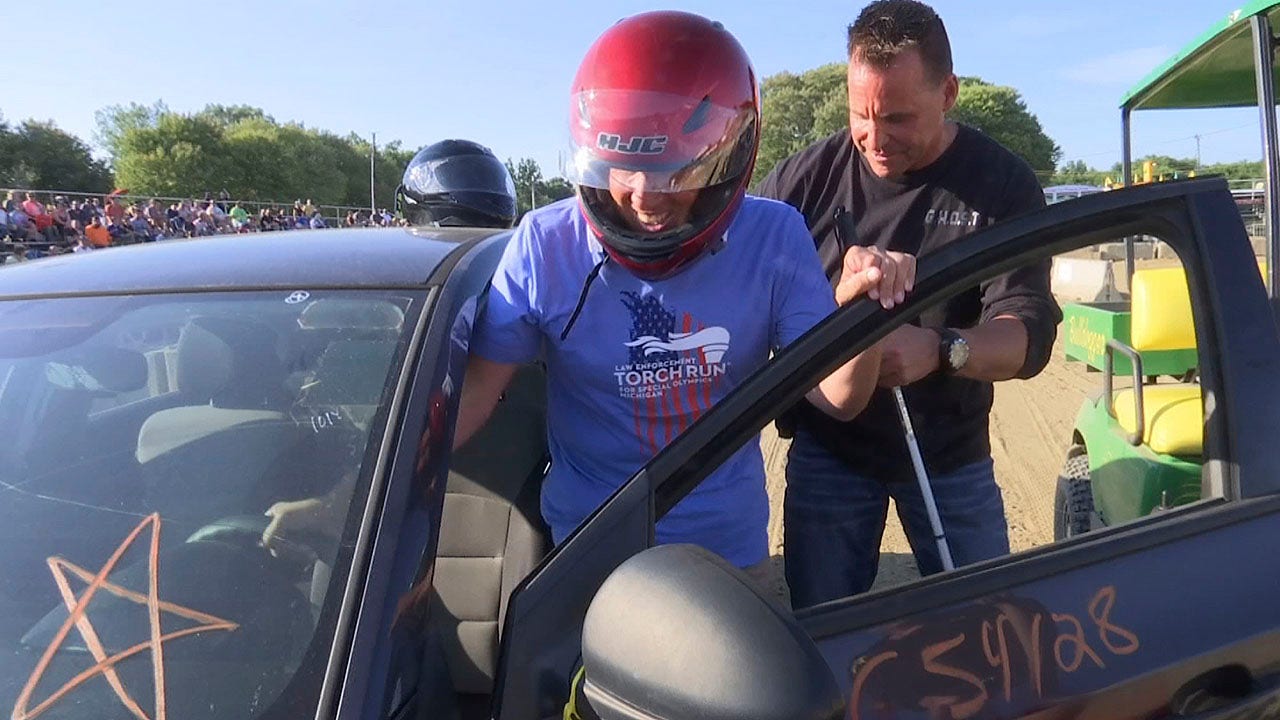 Now, he has demonstrated that someone who is blind can drive a race car as well.

Bernstein, legally blind since birth, told Fox News Digital this week that Sheriff Chris Swanson, who rode in the passenger seat, assisted him with directions on Tuesday, Aug. 23.

That was the day Bernstein drove around on a dirt track at the Genesee County Fair near Flint, Michigan. It was his first time driving a car.

“People with a disability know what we can accomplish, but the real thing is for those who are not disabled to give us an opportunity,” Bernstein, 47, said.

Michigan Supreme Court Justice Richard Bernstein, who is blind, gets into a car to drive for the first time at the Genesee County fairgrounds in Mt. Morris, Mich., on Tuesday, Aug. 23, 2022. Sheriff Chris Swanson, rear, rode in the passenger seat and gave instructions.
(WNEM-TV via AP)

His inspiring story is raising awareness of what others like him do every day.

“People who are blind power everything we do,” Shawn Dobbs, vice president of marketing and public relations at the Lighthouse for the Blind, Inc., in New York City, told Fox News Digital.

Dobbs said that includes people who are “working in manufacturing,” making products “for the federal government and the aerospace industry, working at one of our base supply centers or in contract management services, providing Braille literacy and technology training to program clients along with working in management and leadership positions throughout our organization.”

SCIENTISTS ARE TESTING WAYS TO RESTORE VISION FOR GENETIC-CAUSED BLINDNESS

An estimated 6 million Americans have vision loss and 1 million had blindness in 2017, according to the website of the Centers for Disease Control and Prevention.

However, the majority of people who are blind or visually impaired are not working or not seeking work — compared to fewer than a quarter of people without disabilities, according to the American Community Survey.

“People who are blind have the ability to do anything their sighted peers can do; they just do it differently,” said Jeff Mittman, president and CEO of Bosma Enterprises, based in Indiana.

Mittman is a service-disabled veteran who lost his vision in 2005 from an IED attack in Iraq.

His company provides employment and training for people who are blind, as well as critical training that teach skills to live independently.

He is also the president of the National Association for the Employment of People Who Are Blind, where he works on a national level to fight the 70% unemployment rate for this group.

“Our community is made better when everyone is able to contribute and take part in society.”

“I want to make sure that every person has the tools and skills to do whatever they choose,” added Mittman.

He’s hiked for over 20 miles on the Appalachian Trail with one of his military comrades, who served as a sighted guide.

“It is my obligation to strengthen and maximize every opportunity for people with vision loss,” he said. “Our community is made better when everyone is able to contribute and take part in society.”

Bernstein, who is seeking re-election to his position in Michigan in November, told Fox News Digital that he’s passionate about his work and stretching his comfort zone in despite of his disability.

He applied the skills to running 25 marathons, participating in one Ironman competition and making his dream of being a race car driver come true.

Although many people know him as a justice, he joked, “No one calls me that. [Now] they call me race car driver.”

When he trained for the marathons, he worked with a team called Achilles International, a nonprofit in New York City that transforms the lives of people of all ages with disabilities, including children and veterans, through athletic programs and social connection.

Bernstein could follow the sheriff’s directions about when to turn even though he couldn’t see, in part because of his training during the marathons with Achilles International.

Since its founding in 1983, Achilles has empowered over 150,000 athletes of all ability levels to participate in mainstream endurance events by providing access to adaptive equipment, training and race opportunities and a supportive community.

“We are building a more inclusive society one walk, run or adaptive cycling ride at a time.”

When Bernstein was driving with the sheriff, he was able to follow the sheriff’s directions about when to turn even though he could not see, in part because of his training during the marathons with Achilles International.

“My favorite part is when he came to the window after we finished driving, and he said, ‘Justice, I want your license and registration,’” he said.

“Life is so intense and heavy sometimes. At some point, you just want to have some fun,” he added.

His next goal is to suit up in a race car uniform, complete with a helmet for safety, and head to the Michigan secretary of state to get his license — just to see what he’ll be told.

However, his passion is to inspire more blind justices on the court. “You have to look at it from a whole different lens. I am a person of faith and [am] kind of spiritual and I have a connection with the creator,” he noted.

“Sometimes struggle gives you the ability to empathize [more] with others.”

“You do these endurance competitions and your body is kind of limited when you do these [marathon] competitions, but it is your spirit that can disconnect from your body and this allows you to touch the face of God,” he added.

“The body is incredibly mortal but spirit and soul [are] unbelievably powerful.”

When he’s running, he has guides to help him to turn — but when he did the Ironman competition, it became harder because he could not hear the guide underwater.

LIKE BRAD PITT, DO YOU HAVE TROUBLE RECOGNIZING PEOPLE? IT MAY BE PROSOPAGNOSIA OR ‘FACE BLINDNESS’

“You keep getting hit in the face when underwater. Other competitors get entangled, and you start to feel like you are drowning and that’s when you get spiritual — you are getting tugged under and that is when literally your spirit disconnects from body and [you] just have faith to keep pushing.”

“That is the essence of life.”

His own life perspective as someone who cannot see allows him to experience more struggle and hardship, he said, but “sometimes struggle gives you the ability to empathize with others” as a judge.

People ask him how he can do his job if he cannot see evidence.

He told Fox News Digital that this, really, is not the job. Rather, it’s his job is to make sure the procedure is followed correctly. That is his focus; ultimately, the evidence is presented in reports.

Every Wednesday, he gets an estimated 25 cases that affect real people’s lives. “We are the last stop,” he added. He deals with serious issues people face, such as life without possibility of parole — so every case matters.

He cannot put every case in Braille; it would take too long, nor can he put cases on the computer, because it would take him beyond the necessary conversations he needs to have with his colleagues.

Bernstein prepares for these cases by memorizing all 25 cases every week.

“You reach a certain point where being blind is irrelevant.”

“I can’t learn every case word-for-word — that’s impossible, but I can learn [them to] such a degree [that] all legal issues are known,” he told Fox News Digital.

“What is prejudice? Pre-judge — prejudice is done visually. I don’t know what people look like or how they dress,” Bernstein said.

“These are real lives in the balance — and you reach a certain point where being blind is irrelevant.”

The Associated Press contributed reporting to this article.