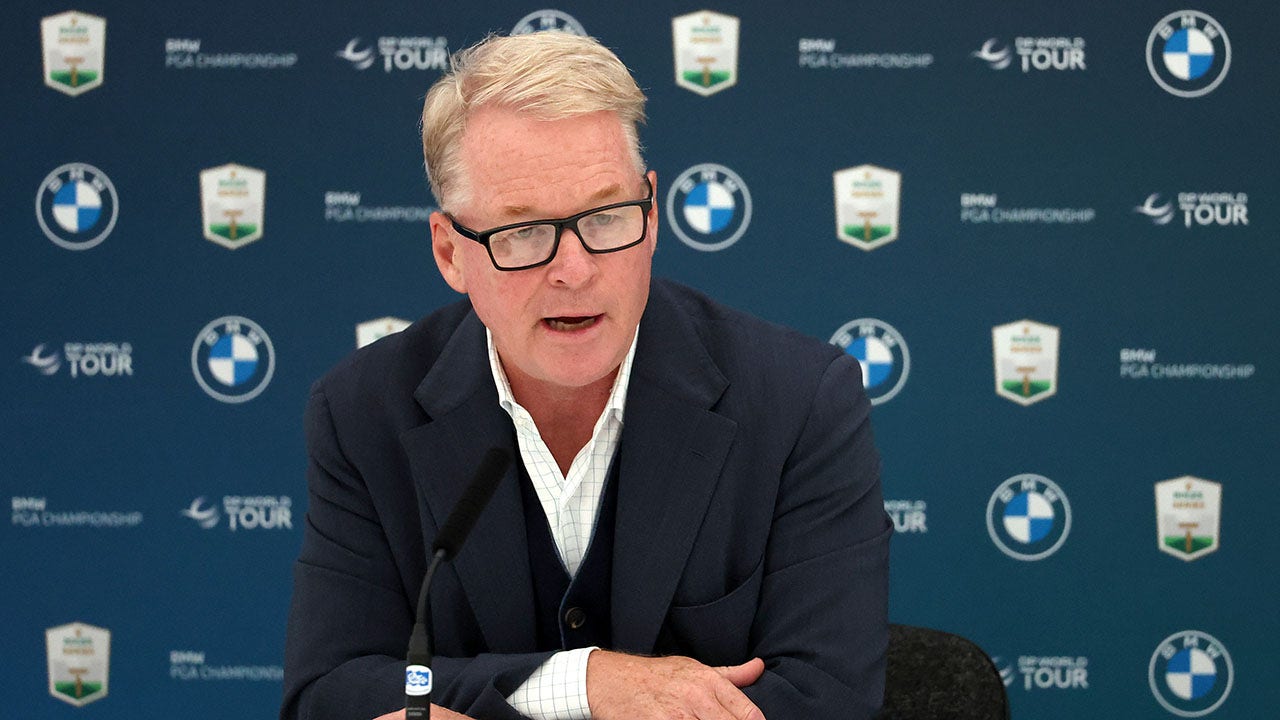 DP World Tour CEO Keith Pelley came to the defense of his circuit and players this week following a players meeting at Wentworth where LIV Golf players competing at the BMW PGA Championship reportedly questioned the status of the European Tour.

Pelley spoke to reporters about Tuesday’s meeting but declined to get into specifics over what was discussed, adding only that reports about a “poor state of the traditional golfing world” are “just not right.”

Ian Poulter of Majesticks GC tees off on the fifth hole during the LIV Golf Invitational — London at The Centurion Club June 10, 2022, in St Albans, England.
(Joe Maher/LIV Golf/Getty Images)

“There were a couple of questions from LIV players that I think we answered, and the meeting was over in a very short time,” Pelley explained.

“As I said to our partners and sponsors on a Zoom call last week, it is easy to get dragged down by the LIV propaganda machine, churning out negative news stories and misinformation about the poor state of the traditional golfing world, including our tour. It’s just not right.”

Keith Pelley, CEO of The European Tour Group and DP World Tour, speaks to the media during a press conference prior to the BMW PGA Championship at Wentworth Golf Club Sept. 7, 2022, in Virginia Water, England.
(Warren Little/Getty Images)

According to Golf Digest, sources said Poulter asked about three things, including accusations that the DP World Tour is just a “feeder tour” for the PGA Tour.

“I was shocked by how little the LIV guys had to offer,” one anonymous player in attendance told the outlet. “I thought they would arrive all guns blazing.”

But Pelley refuted this claim in his press conference.

Ian Poulter of Majesticks GC lines up a putt on the second green at the LIV Golf Invitational — London at The Centurion Club June 9, 2022, in St Albans, England.
(Joe Maher/LIV Golf/Getty Images)

“Some of these players have said we are a feeder tour and even made a suggestion that we are headed towards being the fifth tour in the world,” Pelley said, via the Golf Channel.

The LIV golfers who are European Tour members are allowed to play at Wentworth while their suspension for playing in the inaugural event of the breakaway series is under appeal. Their Ryder Cup status is also subject to legal appeals.

Seventeen golfers from the Saudi-backed circuit will compete in this week’s tournament beginning Thursday.

Paulina Dedaj is a Digital Reporter for Fox News and Fox Business. Follow Paulina Dedaj on Twitter at @PaulinaDedaj. If you’ve got a tip, you can email Paulina at [email protected]