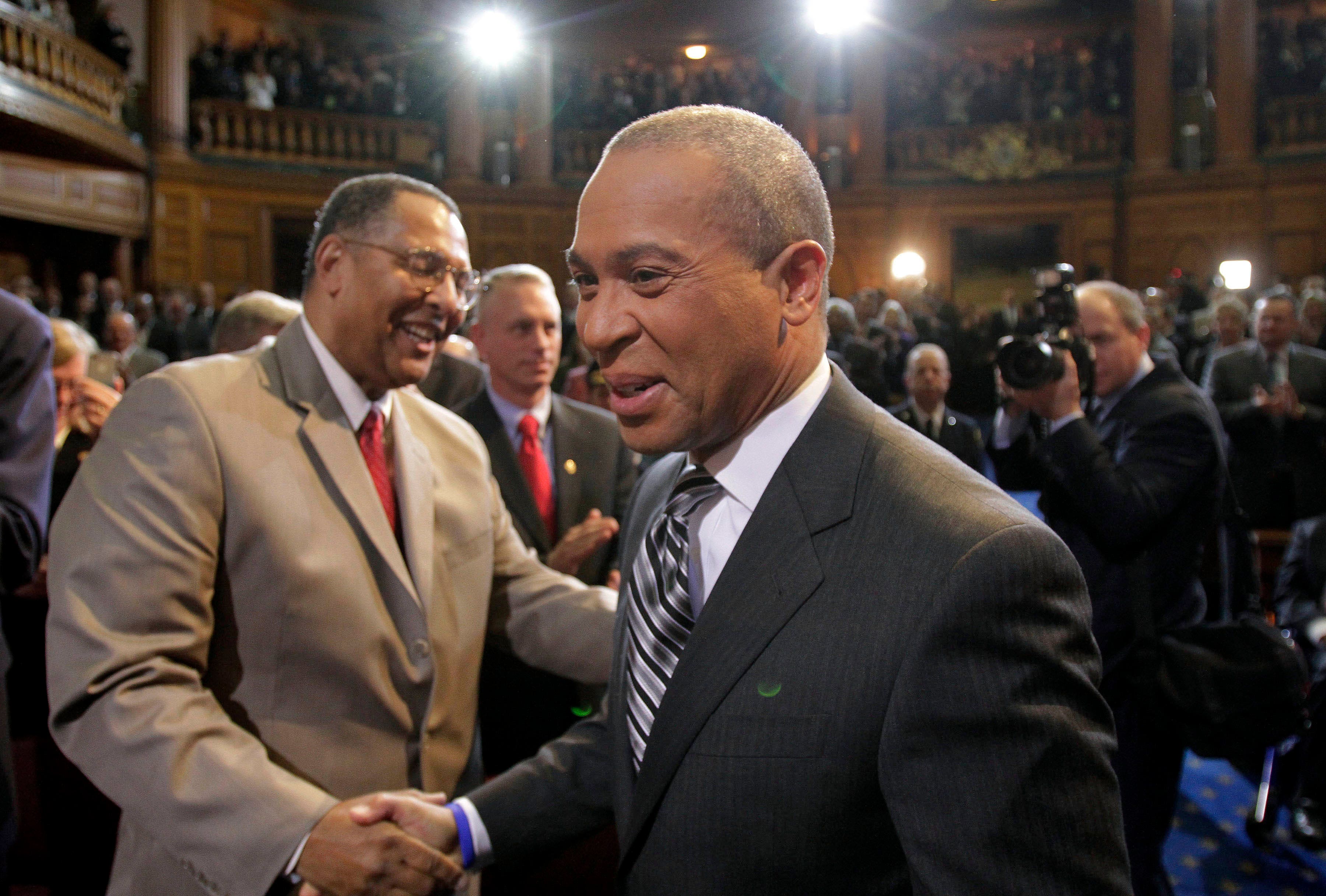 Former Governor of Massachusetts Deval Patrick denied that Democrats have contested the legitimacy of Trump’s presidency during a Sunday interview on CBS.

CBS Face the Nation host Major Garrett explained to Patrick that many in a focus group found Democratic rhetoric about elections to be hypocritical after years of contesting their legitimacy.

Patrick appeared to outright deny that there was a history of Democrats doing so.

“Well, I think it’s important for us to hear that, first of all, and to — and really try to process that,” he began. “I think I experienced that differently. I think when Donald Trump — if what you mean is objections to Donald Trump winning the presidency, I don’t think there was any Democrat calling the election itself illegitimate because the outcome was surprising or disappointing to Democrats.”

Then-newly re-elected Massachusetts. Gov. Deval Patrick, right, is greeted by Chief Justice of the Massachusetts Supreme Court Roderick Ireland, left, as Patrick arrives in the House Chamber at the Statehouse, in Boston.
(AP)

He added further that there is a great danger to people contesting elections in bad faith.

“I think it is important, though, to acknowledge that there is frustration that runs pretty deep throughout the political spectrum about democracy as a path to a better future,” the former governor warned. “And that is because I think we’ve been treating it in this — in these kind of careless ways for a long, long time. It’s a whole other order of magnitude — and that is serious enough, but a whole order of magnitude to say that democracy is illegitimate unless the outcome is the one you want or the one you voted for.”

He appeared to hammer a point that Democrats merely objected to Trump’s policies rather than his legitimacy itself.

“I don’t think that’s what Democrats were objecting to,” he asserted, before appearing to pivot and say that “in the policy choices of Donald Trump and those who have supported him, that’s a very, very different thing.”

But the record shows some Democrats denied the legitimacy of then-President Trump after he won the presidential election in 2016.

The RNC Research Twitter account released an approximately 10-minute compilation video appearing to show Democrats denying the legitimacy of past election results or at least indulging those who do so.

One clip featured was then-candidate Kamala Harris appearing as a guest on a 2019 episode of The Breakfast Club radio show, where a host claimed, “I think he’s an illegitimate president that didn’t really win.” Harris responded by asserting “you are absolutely right.”

Hillary Clinton, who lost to Trump in 2016 had later referred to him as an “illegitimate president,” claiming he got “illegitimate foreign help.”

President Biden has presided over an American electorate that is deeply divided over the integrity of America’s electoral process itself.
(AP Photo/Susan Walsh)

Civil rights icon and now-deceased Democratic Georgia Representative John Lewis was also featured as he suggested in a 2017 interview, “I don’t see this President-elect as a legitimate president.”

Alexander Hall is an associate editor for Fox News Digital. Story tips can be sent to [email protected]