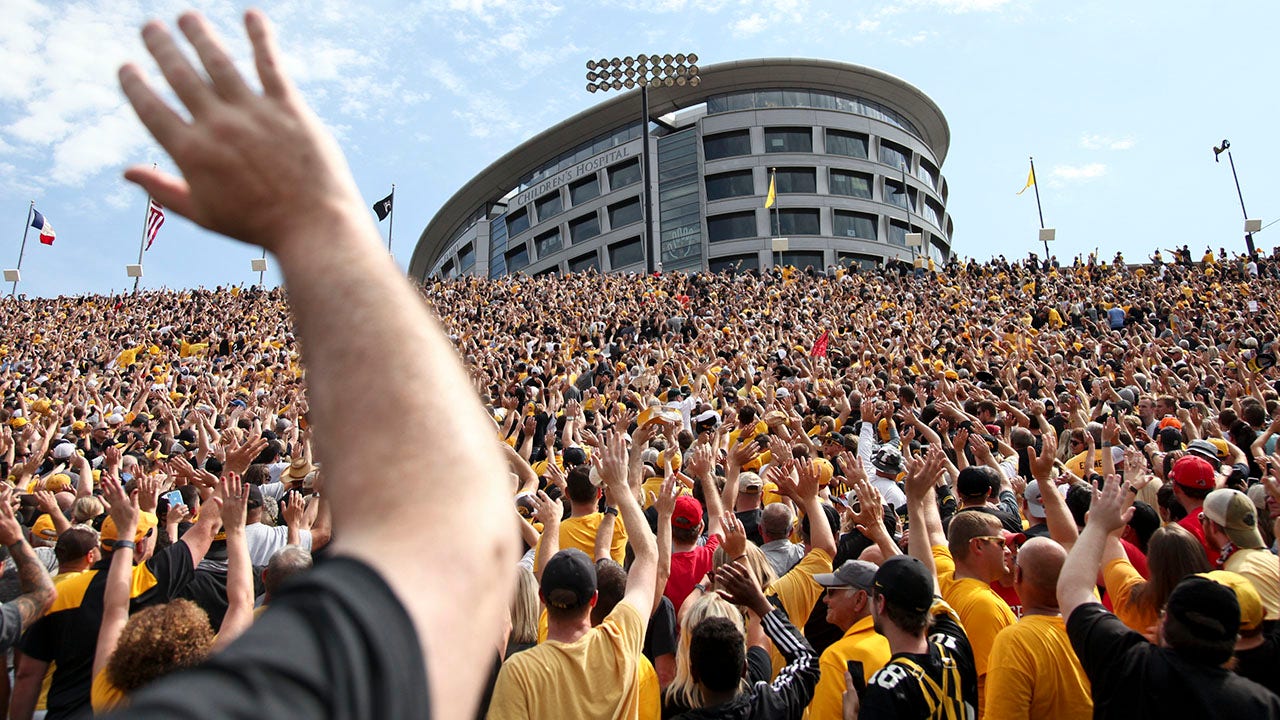 With the true start of college football season underway Saturday, some of the sport’s great traditions have also returned.

Perhaps the most heartwarming happens at the University of Iowa.

Fans wave to children at the University of Iowa Stead Family Children’s Hospital during the first half of a matchup between the Iowa Hawkeyes and Rutgers Scarlet Knights Sept. 7, 2019, at Kinnick Stadium in Iowa City, Iowa.
(Matthew Holst/Getty Images)

In 2017, the University of Iowa Children’s Hospital opened its new building that overlooks the stadium. When the hospital opened, a fan pitched the idea of a new tradition.

It’s known as the “Hawkeye Wave,” the “Kinnick Wave” or simply “The Wave.” At the end of the first quarter at every home Iowa Hawkeyes game, the crowd turns to the hospital to wave to child patients. Players — including the opposition — officials, staff members and even broadcasters have joined in.

The tradition is only five years old, but memories of it will last a lifetime.

The Wisconsin Badgers don’t play until 7 p.m., but House of Pain might be blaring through some pregame tailgates already.

At the end of the third quarter at every Badger home game, their 1992 hit “Jump Around” blasts through the public address system. And, well, you can guess what fans do.

Every Saturday is leg day in Madison, right?

Some teams have trolled Wisconsin with the song though. After Minnesota upset Wisconsin last year to win the Paul Bunyan Trophy, Golden Gopher fans stormed the field, and the stadium played the rival’s song.

Another recent tradition was found by accident, this one in Ann Arbor.

During a 2016 Michigan game against Wisconsin at The Big House, stadium officials decided to play “Mr. Brightside” by The Killers, and the place went nuts.

It has been played at every UM home game ever since, including on Saturday. At last year’s Big 10 championship game, fans took it upon themselves to belt it out.

One more tradition returns Saturday, this one in South Carolina.

Similar to Michigan’s “Mr. Brightside,” this too was pretty much an accident.

In 2009, No. 4 Ole Miss traveled to Columbia and was facing an upset loss to the Gamecocks. On a third down, Darude’s smash hit “Sandstorm” played, and the crowd went berserk.

After a sack, it played again. And all hell broke loose. There was an illegal substitution because of how loud it was, the next play went incomplete, the upset was finished and a tradition was born. (Fast forward to the 2:20 mark below to see the birth of the tradition).

College: It’s the best four years of your life.