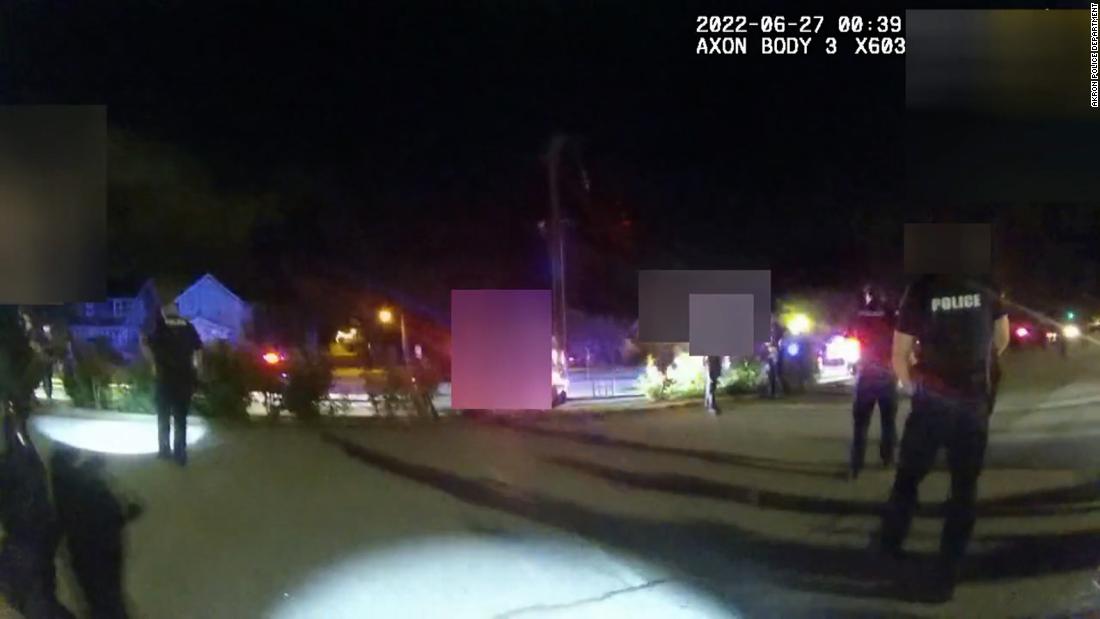 In a statement Friday through their attorney, the Walker family said the City of Akron “promised to release” additional police body camera video to their legal team “in a timely manner”.

“Now, two months after Jayland’s death, we have received just hand-picked videos, which the City has also released to the media in an apparent effort to build its own narrative of Jayland’s death,” the Walker family statement said.

“We call on the City to stop re-traumatizing the Walker family with these repeated edited video drops and release all unedited videos to their counsel in one comprehensive collection,” the statement said.

The videos, obtained by CNN through a Freedom of Information Act request, were heavily redacted when released by Akron city officials Friday. The 24 video clips show a total of more than four hours of the shooting and its immediate aftermath.

In each of the videos, there are several sections where video is blurred or blacked out and/or where the audio is muted. In a statement attached to the video clips, the City of Akron told CNN, “Officer names and identifying information has been redacted, including information that is inextricably intertwined with the officers’ identities.”

The statement cites Ohio law, which allows for the redaction of officer names and identifying information, and pictures of officers “whose assignments may include undercover or plain clothes assignments” or when disclosure would “create a substantial risk of serious bodily harm” from a perceived likely threat.

CNN has reached out to Akron Police and Akron City officials for comment on the family statement. CNN has also asked police and the Ohio Attorney General’s Bureau of Criminal Investigation for comment on the newly released video and is yet to receive any response.

In the week following the fatal shooting, police released 13 videos from police body cameras: eight from the officers directly involved in the shooting and five others from officers who were at the scene. The videos were released according to a new city ordinance that requires video footage documenting an active police officer’s use of force to be released within seven days of the incident. Those videos ended right after the gunshots were fired.

On Friday, CNN received the 24 videos that show the shooting and the immediate aftermath. In several, a barrage of gunfire is heard for around seven to eight seconds, followed by officers trying to establish if Walker is armed. In the videos, Walker is non-responsive and lying face-up on the ground, with several officers aiming weapons at his body. Walker appears to raise his hands towards his chest in at least one video before officers approach him and turn him over to handcuff him.

An autopsy revealed Walker suffered 46 gunshot wounds or graze injuries. The Ohio Bureau of Criminal Investigations is investigating and eight officers were placed on administrative leave at the time.

“Can anyone see the gun?” one officer is heard repeatedly yelling, as a group of officers stand with guns still aimed at Walker. “Where is the weapon at?” one is heard asking in several of the videos.

“We don’t know, we can’t see it,” another officer responds. “OK, we’ve gotta move in and cuff him,” another officer says. A group of officers then move to Walker and turn him over to his front. Several are heard rendering first aid. Officers shout for light and ask for tourniquets and packing gauze. Others are heard describing some of the locations of gunshot wounds on Walker’s body, including his face, neck, back, chest and backside.

“Is he still breathing?” one officer asks. “No,” one officer says. “I can’t tell,” another replies. A short time later, officers say they are not able to find a pulse.

In the weeks following the shooting, Akron Police Chief Steve Mylett told CNN affiliate WEWS department policy requires officers to handcuff a suspect following all officer-involved shootings because the suspect may continue to present a threat. The chief conceded the policy needs to be reviewed.

A week after the shooting, Mylett said the eight police officers fired their weapons following the vehicle pursuit and a short foot chase, believing Walker was turning towards them, reaching towards his waist and “moving into a firing position.”

Walker was not armed at the time of the shooting. A handgun and loaded magazine were found in Walker’s car after the shooting, police said. Officers said Walker fired a gun from his vehicle during the car chase.

None of the videos released to CNN show the inside of Walker’s car. Some show police zeroing in on the vehicle after Walker was shot.

One video shows a group of officers approach the car with their weapons drawn. “Vehicle’s clear,” one officer says, after peering inside the car through the front passenger window.

In another clip, officers shout for someone to stay with car. “It’s got a firearm in it,” one officer says. “Yeah, just leave it,” the officer responds.

Another video appears to have captured the vantage point of a police supervisor who takes command of the scene that night. Around one minute and 28 seconds after the shooting, that officer approaches a group of police huddled over Walker.

“Anybody who shot go over here for me,” the officer says. The officer asks if the officers are okay. “Hey, everybody make sure they’re good, let’s take a deep breath, let’s start getting it figured out, okay?”

While much of the video frame is blurred, the bottom third of the screen shows a group of officers walking away from where Walker is being rendered first aid. It is not clear if the officers step aside separately or together.

A few minutes later, the supervising officer returns to where Walker is on the ground and says, “Alright listen, anybody who was actually involved in the shots, is there anybody here?” Another officer says, “Negative.” The officer then speaks about gathering body-worn cameras.

Another video shows a different officer working to sequester the police who fired at Walker from one another. “Were you guys involved? They were? They need to go sequester. Here, I’ll walk with you.”

During the news conference a week after the shooting, Chief Mylett said officers were “immediately sequestered” from one another pending an investigation into the officer-involved shooting.

At one point, one body camera captures a group of officers congregating in a circle near parked patrol cars.

The video is muted and faces are blurred. It is not possible to make out what was being discussed or if the group includes any of the eight officers involved in the shooting.

Walker family attorney Bobby DiCello said it’s that sort of video which worries him. “We’re concerned that they put all these officers together and the audio is off,” DiCello told CNN Saturday. “It is unreasonable to strip the videos of their value at this point.”

The Akron Beacon Journal, which sought release of the videos under the city law requiring police to post videos of incidents involving police use of deadly force, was first to report on the content of the fresh videos last week.