‘Lord of the Rings: The Rings of Power’ becomes Amazon’s most-watched premiere ever with 25 million viewers 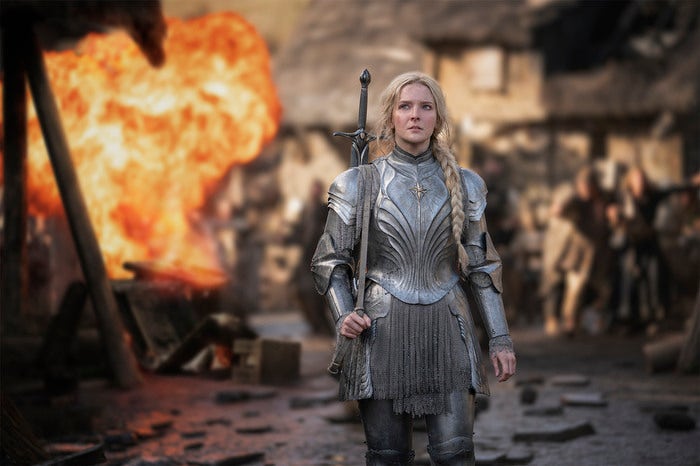 “The Lord of the Rings: The Rings of Power” has become Amazon Prime Video’s most-watched premiere ever.

The fantasy television series’ debut drew a global audience of more than 25 million viewers, the largest in the streaming platform’s 15-year history, according to a report by Deadline on Saturday.

“Rings of Power”, which is based on J.R.R. Tolkien’s classic “The Lord of the Rings” novels, premiered Thursday in 250 countries and territories.

The Lord of the Rings: The Rings of Power has become Amazon Prime Video’s most-watched premiere ever.
(Amazon Studios via AP)

“It is somehow fitting that Tolkien’s stories – among the most popular of all time, and what many consider to be the true origin of the fantasy genre – have led us to this proud moment,” Head of Amazon Studios Jennifer Salke said.

“I am so grateful to the Tolkien Estate – and to our showrunners J.D. Payne and Patrick McKay, executive producer Lindsey Weber, cast and crew – for their tireless collaborative efforts and boundless creative energy. And it is the tens of millions of fans watching – clearly as passionate about Middle-earth as we are – who are our true measure of success.”

The eight-episode series was renewed for a second season ahead of the show’s premiere, with a five-season commitment that was part of the deal when Amazon acquired the rights from the Tolkien estate in 2017.

“Rings of Power” has been billed as the most expensive show of all time. According to Time magazine, Amazon spent $465 million on the first season and estimated costs for the series’ five-season run are projected to top $1 billion.

Co-created by Payne and McKay, “Rings of Power” is set thousands of years before the events in Tolkien’s “The Hobbit” and “The Lord of the Rings” books, during a time of relative peace in Middle-earth.

The show follows an ensemble cast of characters, some who will be familiar to fans as well as new characters, as they “confront the long-feared re-emergence of evil to Middle-earth,” per a logline for the show.

Filming for the first season took place in New Zealand, where Peter Jackson’s “Lord of the Rings” movie trilogy was filmed.

In 2021, Amazon announced that production for the second season would move to the United Kingdom. Season two is set to begin filming in October.

Though the show was met with mostly positive reviews by critics and has an 86 percent score on Rotten Tomatoes, its current audience score sits at 36 percent.

This image released by Amazon Studios shows Owain Arthur, left, and Sophia Nomvete in a scene from “The Lord of the Rings: The Rings of Power.”
(Amazon Studios via AP)

On Friday, Amazon made the unusual move of suspending user ratings for the show.  According to The Hollywood Reporter, the step was taken to prevent “review-bombing.”

Review-bombing occurs when a large group of users or users with multiple accounts leave negative reviews online to lower the aggregate score of a product or service in order to hurt its popularity and/or sales. The motivation behind review-bombing is often associated with the product’s perceived cultural or political issues as opposed to its quality.

An Amazon source told the outlet that “reviews are being held 72 hours to help weed out trolls and to ensure each review is legitimate.” The insider later added that this was a practice that the streaming platform had implemented this summer for all of its new shows.

Disney+ Marvel’s new series “She-Hulk” was recently the target of suspected review-bombing on IMDB when the show received an 88 percent critics’ score and an initial 36 percent audience score.