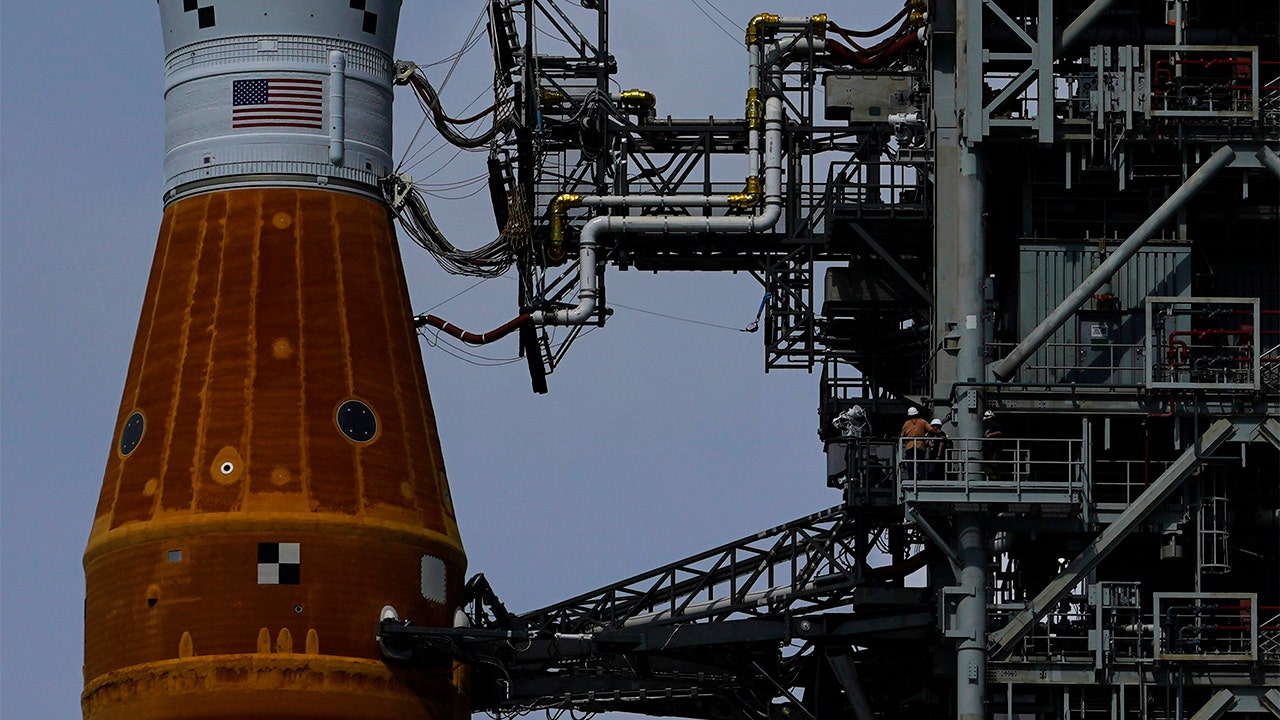 NASA is regrouping after another fuel leak delayed the historic launch of its Artemis rocket Saturday.

The mission’s management team is slated to meet Saturday afternoon to see if there is still a possibility for liftoff in the coming days or if rolling the Space Launch System (SLS) and Orion crew capsule back into the Vehicle Assembly Building is the best course of action.

If so, NASA Administrator Bill Nelson said the launch would occur in mid-October, noting that there was already a launch to the International Space Station (ISS) scheduled during the first week of next month.

The earliest targeted launch date for the agency’s SpaceX Crew-5 mission is Oct. 3 from the Kennedy in Cape Canaveral, Florida.

ARTEMIS MOON LAUNCH: AMERICANS WEIGH IN ON WHETHER NASA PROGRAM IS WORTH $93B COST

The NASA moon rocket stands on Pad 39B before the Artemis 1 mission to orbit the moon at the Kennedy Space Center, Friday, Sept. 2, 2022, in Cape Canaveral, Fla.
(AP Photo/Brynn Anderson)

“We’ll go when it’s ready. We don’t go until then,” Nelson said in an interview after the launch was officially scrubbed. “And especially now on a test flight because we’re going to stress this and test it and test that heat shield and make sure it’s right before we put four humans up on the top of it. So, this is part of the space business.”

The announcement came after hours working to troubleshoot the leak.

People wait for the NASA moon rocket to launch on Pad 39B before the Artemis 1 mission to orbit the moon at the Kennedy Space Center, Saturday, Sept. 3, 2022, in Cape Canaveral, Fla.
(AP Photo/Brynn Anderson)

The lunar rocket had been scheduled to launch from the Kennedy Space Center no earlier than 2:17 p.m. EDT.

A previous launch attempt of the 322-foot rocket on Monday was also scrubbed due to a bad engine sensor and leaking fuel.

NASA aims to send the SLS, the most powerful rocket it has ever built, and the Orion crew capsule around the moon.

The NASA moon rocket stands on Pad 39B before the Artemis 1 mission to orbit the moon at the Kennedy Space Center, Saturday, Sept. 3, 2022, in Cape Canaveral, Fla.
(AP Photo/Brynn Anderson)

When the launch is eventually successful, Orion will travel into space for about six weeks before splashing down in the Pacific Ocean.

If the demo with test dummies works, astronauts could fly around the moon in 2024 and land on it in 2025.

Julia Musto is a reporter for Fox News Digital. You can find her on Twitter at @JuliaElenaMusto.