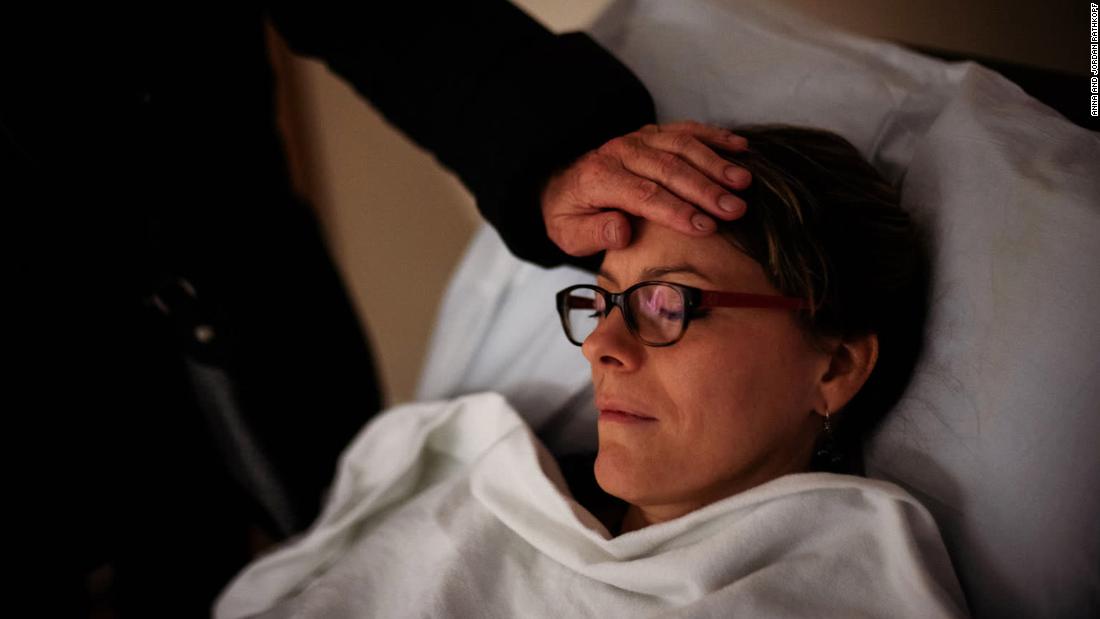 Helena Světlá, left, and Anna Rathkopf share a laugh in the hospital in 2021 as Rathkopf holds a mirror for her mother to apply lipstick.

It was a small gesture — holding her mother’s hand — that opened photographer Anna Rathkopf’s eyes to the uncomfortable way in which her world was shifting.

The two women were at NYU Langone Hospital in Brooklyn, New York, where Rathkopf’s mom, Helena Světlá, was receiving treatment in 2021 after a stroke and subsequent colon cancer diagnosis days later.

Rathkopf had already taken charge, packing clothes for her mom and handling the medical paperwork. She spoke for Světlá as well: Both women are from the Czech Republic, and Rathkopf’s mother, who is now 69, does not speak much English. But when their hands were touching, Rathkopf realized how much her mom, and their relationship, had truly changed.

“Her hands actually started to remind me of my grandfather’s hands. That was her father, with the veins and everything,” said Rathkopf, 43. “And I’m realizing that my mom is my grandfather, for me … that we are moving in the roles. And Jesse (Rathkopf’s son) is me. It’s really weird in that way that you realize, OK, now I’m my mom. I’m the mom.”

She captured the moment as part of a deeply personal photo series documenting Světlá’s journey through surgery, treatment, and the ups and downs that followed. Taking pictures was a way to cope with the hard truths of their new reality, Rathkopf said, including finding herself in a caregiver role she wasn’t entirely sure she wanted.

“It’s really hard to see your parents aging. It’s not fun, because they’re not supposed to age. They’re supposed to be here for us,” she said. “Mom will cook for me, right? I’m not supposed to be the one that’s supposed to do the dinners for everybody. … It sounds selfish and egotistical. But I guess that’s how we are as kids.”

The number of people in Rathkopf’s position has been growing — about 53 million adults in the United States were unpaid family caregivers in 2020, up from 43.5 million in 2015, according to a report by the National Alliance for Caregiving and AARP. Around half of those were caring for a parental figure, said Scott Beach, a social psychologist at the University of Pittsburgh.

“A lot of folks don’t really think it’s going to touch them,” said Beach, director of the survey research program at the school’s University Center for Social and Urban Research. “All of us at some point are either going to need care or maybe help provide care or something.”

Rathkopf, who received a shocking diagnosis of her own in December 2016, has been on both sides of that dynamic.

Light in the dark

Learning she had breast cancer fell on Rathkopf like a huge weight; it was also a catalyst. Her hopes of having a second child began to fade as she worried about how long she would be around to raise her first, Jesse, who was 2 at the time. The situation gave her the nudge she needed to leave her steady job and join her husband, Jordan Rathkopf, in doing freelance photography full time.

Their commercial work spans industries — including law, education and health care — but Anna Rathkopf said everything they do revolves around emotions and connecting with people.

“The emotions have to be there. And the feeling of realness,” she said. “Even if you do it with lights, even if you do a really big production … we’re always focused on the emotions between the subjects. And I think that’s what pulls people in.”

That approach, of course, took on a different tenor when the photographers became their own subjects and a loved one’s health was the focus. Emotions — sadness, fear, love, anger — were abundant. But the scenes, shot by both Jordan and Anna, were also far from Instagram-perfect: They included hospital rooms and doctor’s offices, post-surgery pics and close-ups of an allergic reaction.

The moments captured were some of the toughest, both mentally and physically, of Rathkopf’s life so far. Rather than an intrusion, the camera at those times could be a welcome distraction for the family, another way of caring for one another. Often just the click of the shutter could lighten the mood, interrupting tears and bitter “Why me?” inner monologues, dragging them back to the present.

“In certain moments, (Jordan) would pull out the camera, and I would be crying, but it always made me laugh,” Rathkopf said. “And he also used it as kind of pulling me out of really dark moments. Because he would (joke) like, ‘Oh, you should cry more. This doesn’t look big enough.’”

Levity continued to be a lifeline when, not long after Rathkopf started feeling better, her mom fell ill. Světlá had been living with the family since Jesse was born and provided essential support — cooking, cleaning and taking care of her grandson — during Rathkopf’s illness. As they dived into navigating yet another treatment plan, visits to the doctor and hospital stays, taking the camera along was “like muscle memory,” Rathkopf said.

“She would start telling me ‘Oh, no, I can’t believe you’re taking pictures right now. I’m in the hospital,’” Rathkopf recalled. Ultimately, though, Světlá allowed a surprising level of access.

“I knew you let yourself be photographed, too, so I didn’t mind,” said Světlá, addressing Rathkopf in a video interview in which they were both present. CNN has translated Světlá’s responses from Czech.

Even the bathroom wasn’t off-limits. Rathkopf’s uncle Pavel Hečko is a well-known Czech photographer, so her mom, who is a painter, was used to being in front of the lens. And her health problems left little headspace for other concerns. “I was so wrapped up in myself, I didn’t notice (being photographed),” Světlá said.

Still, Světlá laughed in disbelief when Rathkopf brought her camera into the hospital shower one day. Rathkopf said it was a strange moment for her, too, seeing her mom so vulnerable.

“I had to help her from the bed to walk to the shower. And like, basically help her taking off her clothing. I never did that before,” Rathkopf recalled. “All these feelings are so weird. Because nobody prepares you for that.”

Other images of Světlá — showing her slumped in the car or at a table with her head down — illustrate both the exhausting nature of the treatment process and the tension that often goes with the role reversal the women experienced.

That changing of places, and the awkwardness, frustration and loss that can accompany it, is apparent throughout the series. In a photo from 2017, Rathkopf lies in bed while her mom rests a hand on her head; in a later shot, her mom sits pensively on a bed after arguing with Rathkopf over whether Světlá was following doctors’ advice during her recovery.

Světlá recalls the anger during that fight, saying that being told what she could or could not do made her feel “completely incompetent.”

After being released from the hospital, Světlá struggled with extreme fatigue, a common symptom for stroke survivors.

In 2017, Rathkopf rests while experiencing exhaustion after her chemotherapy treatment.

“When our roles flipped, and suddenly (my daughter) started to take care of me, I was uncomfortable. I didn’t want to admit that I was sick,” Světlá said.

A few photos also highlight the parallels between the women’s journeys.

“You tend to compare, subconsciously, what happened to you to what’s happening to the person that you love,” Rathkopf said. “That was interesting to see how actually the experience is universal.”

That shared experience is ultimately what Rathkopf comes back to when discussing her relationship with her mom — and how she wants to move forward.

Before getting sick, Světlá — whom Rathkopf describes as “bohemian” — loved riding her scooter around with Jesse in tow; neighbors recognized her fire-red hair as the duo zoomed around Brooklyn. While both women are in cancer remission now, Světlá’s continuing stroke-related issues led Rathkopf to insist on an end to the scootering, resulting in another blowup. But time has, again, shifted her point of view.

Now, particularly when she looks back at photos of her mother’s illness, Rathkopf said the anger dissipates and all that’s left is empathy.

“Suddenly, she’s being hit with this crazy feeling of her body betraying (her), and I knew that feeling,” Rathkopf said. “I’m more in the acceptance (phase) and trying not to be too forceful.”

Distance has helped provide a little relief for mother and daughter as well. Světlá traveled to the Czech Republic to visit family last summer and started having some back issues while there, but she plans to return to the US when she feels well enough to travel.

“I think this has passed now,” Světlá said, referring to the tension with her daughter.

Reflecting on past dynamics with her own mother, Světlá added, “Coming back to Prague helped a lot. If I didn’t have a place to go to, it would have been a lot worse. I also finally understood my own mom’s feelings, because when I was taking care of her, I too treated her like a child. The distance gave (my daughter and me) a good perspective. My mum wasn’t able to run away.”

The University of Pittsburgh’s Beach has studied sandwich generation caregivers — people such as Rathkopf who support both older family members and children — and said the tactic of stepping away, when a person is able, can be key to coping.

“That notion of respite, taking a break, just comes up constantly, because people feel like they’re always on call,” he said.

In spite of the pain and strife, Rathkopf finds a lot of joy among her images as well. Photos that include Jesse and highlight the connective tissue between all the members of her household often spark that feeling.

“Even when the emotions are really raw, everybody feels like, OK, but we have this little guy,” she said.

But some less obvious moments stand out, too — including one when Rathkopf knew Světlá wanted to “be back”: After a particularly rough period in the hospital, Světlá asked for her signature red lipstick. Rathkopf’s image after its application reveals smiles on both mother and daughter, inching closer to the versions of themselves they once knew.