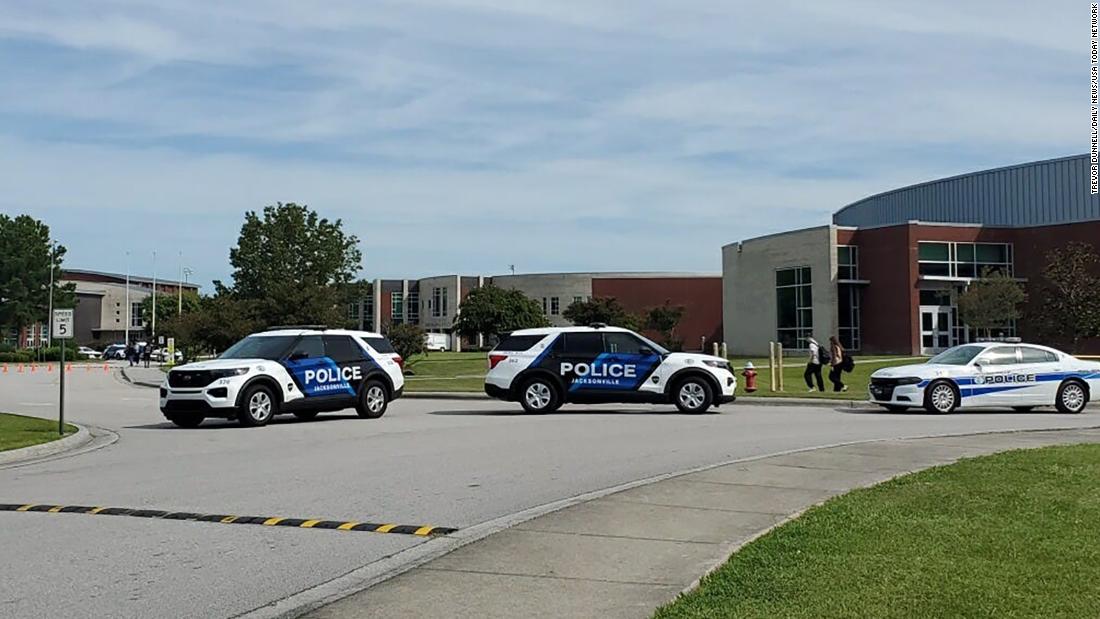 Jacksonville Police said a student resource officer at Northside High School requested assistance around 7 a.m. after a physical altercation between students broke out inside one of the school’s common areas.

Two students were stabbed and taken to a local hospital for emergency care, where one died from their injuries. Both students were minors and their identities will not be released.

“The school resource officer who was on campus rapidly responded to the scene, with the first SRO arriving within 20 seconds and he was able to take someone in custody,” Jacksonville Police Chief Mike Yaniero said in a press conference.

The chief also did not disclose the weapon used, only saying it was a stabbing incident. There is still an active scene at the school and the investigation is ongoing, Yaniero said, adding that charges are forthcoming.

“I have spoken with Jacksonville Police Chief Yaniero and offered state assistance in addition to the SBI to help with the aftermath of this tragedy,” North Carolina Gov. Roy Cooper said on Facebook. “Our prayers are with all the students, educators, families and the community.”
The incident occurred only four days after students returned to school for the new school year. Northside High School, located in Onslow County, has about 952 enrolled students, according to the National Center for Education Statistics.

Northside High School students will have a virtual day on Friday and will return to in-person classes on Tuesday, Onslow County Schools superintendent Dr. Barry Collins said in the press conference.

“Most schools need to crack down more, this is life or death”

Melissa Brison Mack, who has three children who attend the high school just one mile away from their home, said the incident “panicked” her.

Her children, who are in 9th, 10th, and 11th grade, had just gotten to school 15 minutes before classes were supposed to start when the incident took place.

“They were arriving as the chaos happened and luckily didn’t witness what happened,” Mack told CNN. “My oldest hunkered down in a friend’s car in the school parking lot and my younger two waited in the parking lot until they were instructed to head to the cafeteria for lockdown.”

The mother of six said she knew something bad happened when the school called parents asking them not to bring their children to school if they hadn’t yet.

“I’m so happy they are safe but I’m not even sure how to tell them to protect themselves at school,” Mack said. “I was just having a conversation with my oldest on the way to dance classes earlier this week about what she would do if there was a shooter and she had a good plan. But then this happens and you realize school just isn’t a safe place them to be if someone can pull out a knife on them.”

Superintendent Collins spoke at the press conference regarding safety measures the school district implements to protect students and staff, specifically by increasing the presence of student resource officers.

“We’ve put a lot of resources into the safety and security of our school district this past year, with the addition of several SROs,” Collins said. “There are other measures that we’ve taken, in terms of the swipe in door locks, cameras, and the ring-in, but there are probably some other things we’re going to have to look at and those are the types of things we’ll be looking at in the next days and weeks.”

However, Mack say it’s not enough and is urging the school to implement better policies to keep their children safe, such as a clear book bag policy or metal detectors at the front doors of the school.

“Most schools need to crack down more, this is life or death,” Mack said. “To the parents this happened to, I’m so sorry that they didn’t have the opportunity I did to pick their child up today.”