Since Trump’s refusal to accept defeat in 2020, the former Attorney General has emerged as one of his most acerbic and significant critics 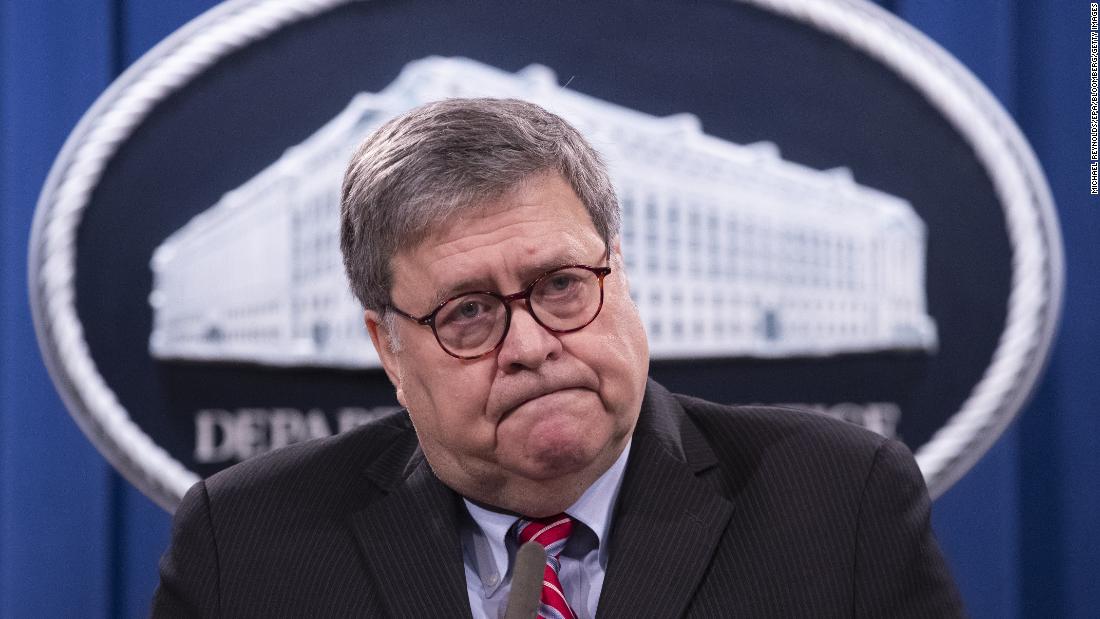 Barr was once seen as a facilitator of the then-President’s penchant for tearing at the limits of presidential power. But since Trump’s refusal to accept his defeat to President Joe Biden in 2020, Barr has emerged as one of his most acerbic and significant critics. He, for instance, infuriated Trump by publicly declaring there was no significant electoral fraud. And his video testimony has emerged as one of the key weapons in the televised hearings run by the House select committee investigating the US Capitol insurrection.
On Tuesday, Barr took aim at a decision by Trump-appointed Judge Aileen Cannon to grant Trump’s request for a “special master” to vet for executive and legal privilege issues the material taken from his home in last month’s FBI search.

“The opinion, I think, was wrong, and I think the government should appeal it. It’s deeply flawed in a number of ways,” Barr said on Fox on Tuesday.

It was the second time in just a few days that the former attorney general had taken to the network favored by conservatives to hammer Trump on the controversy. And his statements are adding to the swirl of outside interest in the next critical stages of this high-stakes legal process — the search for a third-party official to serve as a “special master” and the Justice Department’s decision on whether to appeal Cannon’s ruling, which would come at the risk of further delays for the probe.

Barr’s outspokenness will have three main consequences. First, such comments by a longtime political and legal conservative will add credibility to growing questions not just about Cannon’s legal reasoning but also whether Monday’s ruling, which delivered several big wins to Trump, was motivated by loyalty to the president who appointed her.

Second, his comments will renew intrigue over his personal transformation — from the attorney general who shielded Trump from the full blast of the Mueller report into his 2016 campaign’s links with Russia into one of the ex-President’s most fervent critics. Whether Barr is being driven by an effort to rehabilitate his reputation as a legal straight shooter, a desire to defend the Justice Department against Trump’s attacks or, is simply right on the facts, is open for debate.

Third, Barr’s latest criticism of his former boss — including that he was wrong to have classified information at Mar-a-Lago — will likely earn him a fresh broadside from the ex-President and his acolytes. Not that Barr cares, since he chuckled when he told Fox that Trump’s definition of a RINO (Republican in name only) is anyone who doesn’t believe the election was stolen.

Barr’s criticism added to that of many legal experts over the quality and potential consequences of Cannon’s legal opinion.

After last week calling Trump’s demand for a “special master” a “red herring,” Barr on Tuesday argued that the fundamentals of the case against Trump and those around him in Florida were already set.

“The government has very strong evidence of what it really needs to determine whether charges are appropriate — which is government documents were taken, classified information was taken and not handled appropriately,” Barr told Fox.

After Barr spoke, The Washington Post reported Tuesday evening that information about a foreign government’s nuclear capabilities was among the documents found by the FBI at Mar-a-Lago, citing people familiar with the matter.

The granting of the request for a special master — a step the DOJ vehemently opposed — is a significant complication for prosecutors since it means they will be prevented from reviewing material taken from Trump’s residence for now. An investigation into the potential damage to national security wrought by Trump’s careless handling of the material was allowed to continue.

The comparatively mundane task of finding an official to fulfill the role will be difficult since filings in the case and Trump’s characteristically emotional response to its intricacies suggest agreement between the parties could be close to impossible. Then, given the highly classified nature of some of the material, the person concerned will need to have top security clearances, further narrowing the pool of possible candidates. And the official must be willing to brave the stream of invective that could be flung their way by the former President, who, in an inflammatory campaign trail appearance on Saturday night, branded FBI agents as “vicious monsters.”

The special master’s role will also be complicated by the vague mandate he or she has so far been given by Cannon. Questions of executive privilege — a president’s right to receive private information and advice from officials — has been sparsely litigated, especially in the case of former commanders in chief.

On the face of it, a former president has no established right to make such claims, especially for classified material that did not originate in the White House. But this is an issue that Trump might himself try to challenge in court as part of his frequent strategy of trying to delay accountability.

The same issue weighs on the DOJ’s dilemma over whether to appeal Cannon’s ruling. Many legal scholars have noted that her reasoning that Trump, as an ex-president, is at greater risk of reputational harm than regular Americans appeared to create a whole new category of citizenship under the law. It also provided a potential opening for defense lawyers in any unrelated case to argue that defendants should therefore have the right to a special master — a situation that could considerably clog up the criminal justice system.

For that reason, it might be incumbent on the DOJ to appeal, even though such a move could condemn the Mar-a-Lago case to a long sequence of court challenges that could take months and further delay the investigation.

Ryan Goodman, a professor at NYU Law, told CNN’s Erin Burnett on Tuesday evening that the department should make an urgent appeal to at least release the injunction on its use of material taken from Trump’s home.

But Goodman, like Barr, acknowledged the danger that mounting legal challenges could end up in prolonged litigation. That would suit Trump fine since it would push the case deeper into a 2024 campaign in which he’s likely to be a candidate, which would further enable his effort to condemn the investigation as politically motivated.

How Trump has politicized the judiciary

The increasing scrutiny of Cannon’s actions means she will be the latest judge to be drawn into a vortex of political second guessing in the Trump era of American politics. The way that Cannon has acted has fueled debate over her motivation. After the Trump team filed a threadbare legal document requesting a special master, for example, the judge gave them time to refine their arguments.

At times, her Monday opinion seemed to mirror the conservative criticism of the DOJ — including on the issue of whether Trump had suffered reputational damage from the search. She wrote that there was a need to ensure “the integrity of an orderly process amidst swirling allegations of bias and media leaks.” The most unhinged accusations of bias in this case came from Trump.

At the same time, however, the idea that is circulating on the left that Cannon is nothing but a hack and had to be acting to safeguard Trump’s political interest because she was appointed by him points to a slippery slope. Given that most judges are appointed by presidents, they are all liable to similar charges. If the politicization of the judiciary system continues, it would make it all but impossible in these circumstances for any politician to face true justice for perceived lawlessness.

Of course, this politicization of the legal system has been perpetuated by Trump. Chief Justice John Roberts once issued an extraordinary statement reminding Trump while he was president that there were no Trump judges or Obama judges or Bush judges or Clinton judges but that there was instead an independent judiciary. The statement, released in 2018, followed one of the then-President’s frequent claims that a judge appointed by his predecessor was biased against him.

So, if Cannon is being unfairly maligned for supposed political bias, she is the victim of a trend that originated with the president who appointed her.