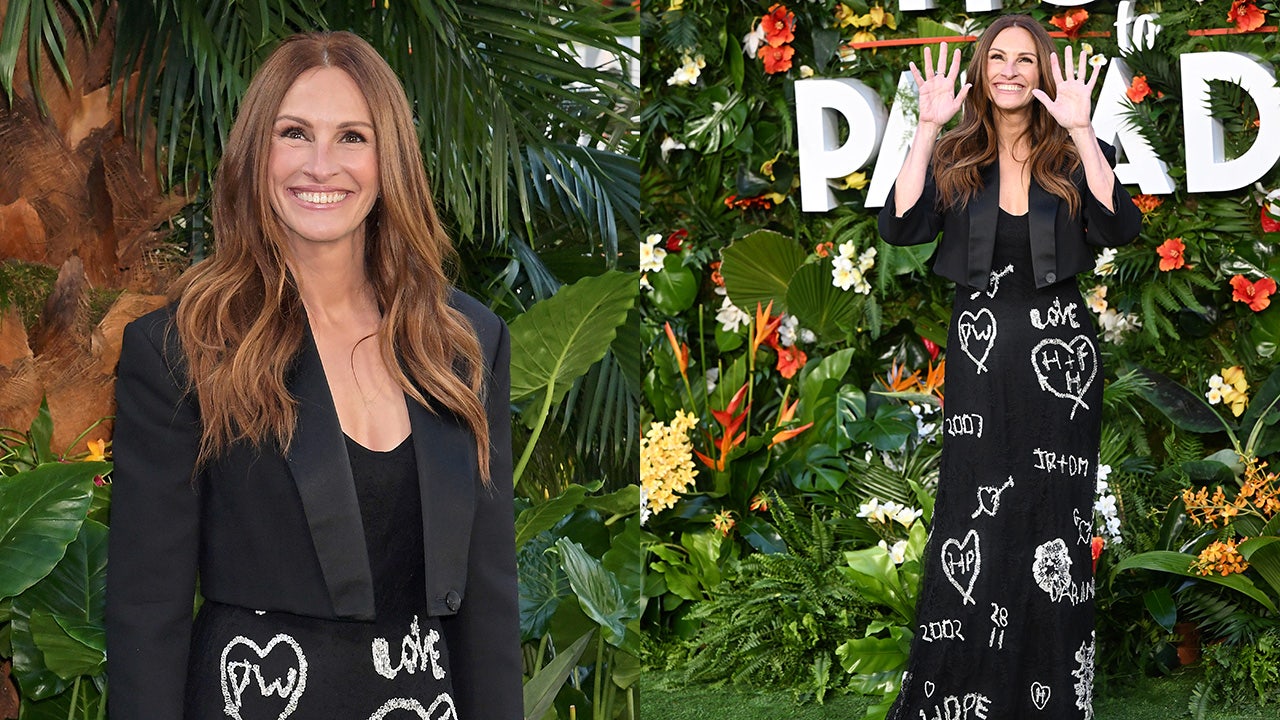 Julia Roberts made a statement at the “Ticket to Paradise” London premiere on Wednesday, wearing a dress with designs meaningful to her and her family.

The actress wore a black Alexander McQueen dress with the words “love,” “hope” and “darling” embroidered throughout. The dress also featured her children’s initials, as well as their birth years; hearts with arrows going through them; her and her husband’s initials “JR+HM”: and the year they got married.

Roberts and her husband, cameraman Daniel Moder, met in 2000 and were married in 2002. The couple share three children together: twins Hazel and Phinnaeus, and Henry. She has often spoken about how much she enjoys motherhood.

“I don’t have the luxury of sitting around anymore. I must have had bags of spare time before I had children, but I don’t know what I did with it and I didn’t appreciate it,” Roberts once said. “But it’s such a terrific trade-off. I don’t have time to get a pedicure, but I sure am happy. Who cares if your feet look bad?”

Julia Roberts wore a dress with her children’s initials and birth years, as well as her and her husband’s initials with the year they were married, embroidered onto it.
(Samir Hussein/WireImage)

Also at the premiere were George and Amal Clooney. Amal kept her look simple, with a red lip and her long hair worn in loose curls. She wore an icy blue sequined dress paired with a metallic silver clutch. George, who co-stars in the film, also kept it simple in a chic navy-blue suit.

Clooney and Roberts have starred in six movies together, including “Ocean’s Eleven,” “Ocean’s Twelve,” “Ocean’s Thirteen,” “Confessions of a Dangerous Mind,” “Money Monster” and now “Ticket to Paradise.”

In an interview with The New York Times, Roberts said she had been wanting to make another romantic comedy for a while but was waiting for the right script to come her way.

“Even with [‘Ticket to Paradise’], I thought, well, disaster, because this only works if it’s George Clooney,” she told the outlet. “Lo and behold, George felt it only worked with me. Somehow we were both able to do it, and off we went.”

The two have become such good friends through working together over the years that it apparently took 80 takes for them to get a kissing scene right because they kept laughing through it.

In “Ticket to Paradise,” Clooney and Roberts play a divorced couple who are forced to work together in their efforts to stop their daughter from getting married to a Balinese local following her post-graduation trip to Bali.

Also starring in the film is Billie Lourd, who announced her pregnancy with her second child on the red carpet for the film. Lourd plays the role of the daughter’s best friend, who accompanied her on the trip to Bali.

Billie Lourd announced her pregnancy with her second child on the red carpet for “Ticket to Paradise.”
(Mike Marsland/WireImage)

Prior to landing this role, Lourd appeared in “Booksmart,” “Scream Queens” and the most recent “Star Wars” sequel trilogy movies.

“Ticket to Paradise” is set to debut in theaters Oct. 21.