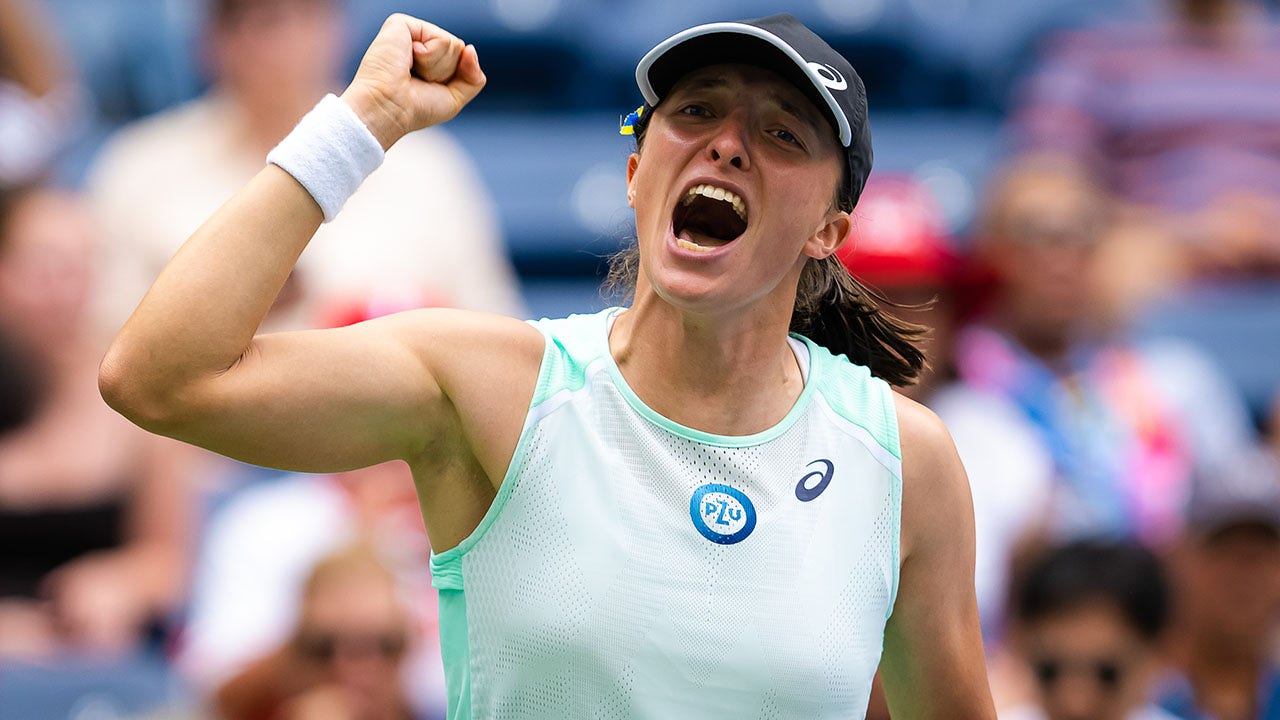 NEW YORK (AP) – Iga Swiatek covered her head with a white towel during one changeover after falling behind by a set and a break in the U.S. Open’s fourth round Monday. She kept making mistakes, then rolling her eyes or glaring in the direction of her guest box.

Eventually, Swiatek got her strokes straightened out and began playing more like someone who is ranked No. 1, moving into her first quarterfinal at Flushing Meadows by coming back to beat Jule Niemeier 2-6, 6-4, 6-0 in Louis Armstrong Stadium.

Iga Swiatek of Poland reacts to converting match point against Jule Niemeier of Germany in her fourth round match on Day 8 of the US Open Tennis Championships at USTA Billie Jean King National Tennis Center on September 05, 2022 in New York City.
(Robert Prange/Getty Images)

The 21-year-old from Poland will face another first-time U.S. Open quarterfinalist next. That’s No. 8 seed Jessica Pegula, the highest-ranked American woman, who advanced earlier Monday with a 6-3, 6-2 victory over two-time Wimbledon winner Petra Kvitova in a match interrupted by rain for 45 minutes during the third game because the retractable roof at Arthur Ashe Stadium was not closed when a drizzle became a downpour.

Pegula called it “a little frustrating,” saying it was particularly tough “at the start of the match, when there’s no feeling of what’s going on. You’re just sitting there in limbo, not sure what to do.”

The U.S. Tennis Association said in a statement that its “weather team” told U.S. Open organizers there was no rain expected. The statement added: “Unfortunately, a pop-up sunshower occurred.”

Iga Swiatek of Poland reacts to a point against Jule Niemeier of Germany during their Women’s Singles Fourth Round match on Day Eight of the 2022 US Open at USTA Billie Jean King National Tennis Center on September 05, 2022 in the Flushing neighborhood of the Queens borough of New York City.
(Al Bello/Getty Images)

In men’s action, No. 9 Andrey Rublev reached his sixth Grand Slam quarterfinal by beating No. 7 Cam Norrie 6-4, 6-4, 6-4. Rublev is into his third quarterfinal at Flushing Meadows; he is 0-2 at that stage in New York — and 0-5 at all majors.

Pegula, a 28-year-old who was born in New York and whose parents own the NFL’s Buffalo Bills and NHL’s Buffalo Sabres, reeled off the last three games of Monday’s opening set, which ended with a double-fault by No. 21 Kvitova, and then the last six games after trailing 2-0 in the second.

This will be Pegula’s third appearance in a major quarterfinal this season — and third against the woman who led the rankings at the time. She lost to the since-retired Ash Barty at the Australian Open, which Barty ended up winning, then to Swiatek at the French Open, which Swiatek wound up winning for her second championship there.

“I just have to play within myself,” Pegula said, “and play smart and be present.”

Iga Swiatek of Poland returns a shot against Jule Niemeier of Germany during their Women’s Singles Fourth Round match on Day Eight of the 2022 US Open at USTA Billie Jean King National Tennis Center on September 05, 2022 in the Flushing neighborhood of the Queens borough of New York City.
(Al Bello/Getty Images)

US OPEN 2022: SERENA WILLIAMS FALLS IN THIRD ROUND, CAPPING OFF ILLUSTRIOUS CAREER

Swiatek arrived in New York having gone just 4-4 since the end of a 37-match winning streak that carried her to six consecutive tournament titles. On Monday, she listened to her usual pre-match playlist — a mix of Pearl Jam, AC/DC, Led Zeppelin and Gorillaz — then came out flat as can be against Niemeier, who is ranked 108th but reached the quarterfinals at Wimbledon in July in just her second major tournament.

Then, just winning the second set to pull even was quite the struggle for Swiatek.

She got broken early and fell behind 2-1, which is when she draped herself with a towel. She seemed to be talking to herself under there.

Whatever went on, Swiatek immediately flipped things around with a three-game run to lead 4-2. Even after getting a chance to serve for that set at 5-3, she double-faulted to close that game.

Nothing, it seemed, would come easily on this muggy afternoon, with the temperature above 80 degrees Fahrenheit (26.7 Celsius) and the humidity above 50%.

But Swiatek did break right back, helped by a wild forehand from Niemeier, and let out a shout.

Iga Swiatek of Poland reacts after winning the second set against Jule Niemeier of Germany during their Women’s Singles Fourth Round match on Day Eight of the 2022 US Open at USTA Billie Jean King National Tennis Center on September 05, 2022 in the Flushing neighborhood of the Queens borough of New York City.
(Al Bello/Getty Images)

To a third set they went, and Swiatek completely cleaned up her act: The unforced error count was one for her and 14 for Niemeier. When it ended, Swiatek jumped and threw an uppercut and shook her right fist.