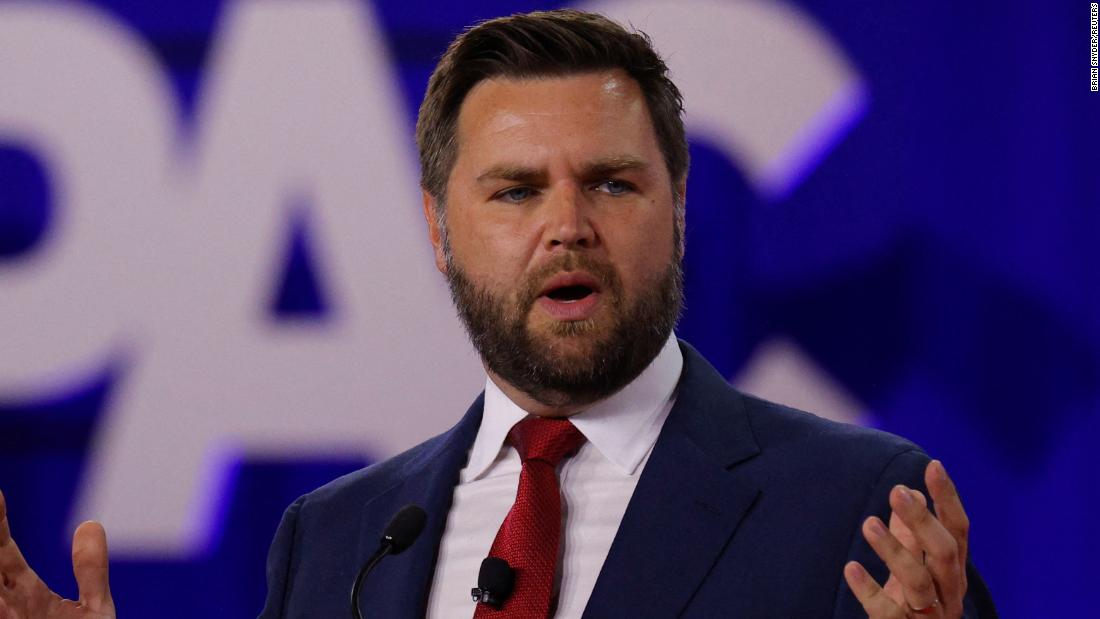 The rookie GOP candidate goes days without any public events, and his campaign gives little information about his whereabouts.

“J.D. is running a campaign where the faithful in the state, the county chairmen, the precinct executives, the executive committee and the Republican Party are saying, ‘where’s J.D.?'” said Bill Cunningham, a conservative radio talk show host in Cincinnati for the past 40 years. “And they want him to do things. People want to meet him. They want to. This is a new guy, new kid on the block.”

Cunningham added: “He’s been spoken to by at least one US senator and at least one governor he respects to kick him in the ass.”

Privately, the blame game has intensified. One senior GOP strategist pointed the finger at the National Republican Senatorial Committee for not providing Vance with a campaign infrastructure to help with fundraising, communications and strategy in the immediate aftermath of his May primary win. (NRSC spokesman Chris Hartline told CNN, “We’ve worked very closely with the Vance campaign and will continue to do whatever is needed to help him win big in November.”)

Some blame the growing pains of a first-time candidate; two GOP sources say he likes to keep a light schedule, especially on weekends.

This spring, Vance emerged from the pack to win the May primary thanks to former President Donald Trump’s April endorsement and GOP mega-donor Peter Thiel’s super PAC, which spent about $17 million to boost Vance. They believe McConnell’s rescue mission will ensure the seat stays in GOP hands, as the top super PAC aligned with Senate Majority Leader Chuck Schumer now plans to spend its money elsewhere.

“He’s like the dog who caught the car,” said a senior Ohio Republican, who asked not to be named.

Vance declined to be interviewed and did not return a call to his cellphone. His campaign refused to provide information about his events this week. A CNN reporter showed up at his campaign office in Cincinnati asking for an interview; a Vance aide said he was not there. In a statement, Vance’s spokesperson didn’t respond to a list of questions, and instead attacked CNN, and contended the candidate has spoken to local news outlets this week.

There are signs he’s been stepping up his game. Vance brought on an experienced fundraiser close to Sen. Rob Portman — the GOP senator whose retirement is opening up the seat — with a deep donor network and he held at least two high-dollar fundraisers this week, including one at the exclusive Scioto Country Club in Columbus where donors paid up to $10,000 to attend, according to invitatiAntoions obtained by CNN. He plans to walk in Marietta’s Labor Day Parade on Saturday.

Alex Triantafilou, the GOP chairman of Hamilton County, said he has pushed back “over the last month or so” on the view that Vance has been MIA, saying the Senate candidate has responded to his text messages, recently met with the local Fraternal Order of Police, and will do a fundraiser and an event with a local Republican women’s club.

“I hear some of this, but I think some of it is driven by the TV ad spending that we see from Congressman Ryan,” said Triantafilou. “I think that’s gotten to people psychologically, but I don’t see it. I see J.D. Vance here, I see him active. His team has been really strong.”

But Cunningham said that Vance has been absent at some key political events and dinners across the state, including one hosted by Ohio Gov. Mike DeWine, a Republican who is up for reelection and may have coattails long enough to help Vance win.

“I told him, ‘get your hands dirty, go to Warren County,'” Cunningham said. “‘You got to spend time in Brown County. They got a fishing tournament at Lake Cowan. Get out there and bury a worm. Go out there.’ But he’s a tech guy.”

Vance is a 38-year-old former Marine, venture capitalist and best-selling author of his memoir “Hillbilly Elegy”, which won praise for its haunting portrayal of the White working class in Kentucky and Ohio. In the Senate GOP primary, Vance overcame an avalanche of attacks highlighting his 2016 “Never Trump” position to earn the party’s most powerful endorsement.

The Senate GOP candidate should be in a strong position to win against Ryan. Then-Democratic presidential candidate Joe Biden lost to Trump in 2020 in Ohio by eight points—and President Biden’s approval rating has been stuck around 40 percent all year, after the US withdrawal from Afghanistan and inflation rose to record highs.

“At the end of the day, Ohio is going to have to decide whether they want to give Joe Biden another vote in the United States Senate and I say that’s not going to happen,” said Triantafilou.

But there has been a dramatic disparity over fundraising and campaign spending between the two party nominees. By the end of June, Ryan raised $21.7 million, compared to Vance’s $3.5 million, and held more than a five-to-one cash advantage, despite spending over $18 million on the race. Two voters in downtown Cincinnati, David Nickol and Nicole Schofield, told CNN that they’ve seen a lot of Ryan commercials, but only one for Vance, featuring the candidate’s wife describing Vance’s early upbringing with an absent father and a mother who struggled with addiction.

Ryan has used his fundraising advantage to promote his message that he’s focused on an economic agenda, burnishing a self-image as a blue-collar warrior. His television ads emphasize bipartisanship and that he aligned himself with Trump on trade — not the fact that he is a Democrat and often votes with Biden.

And the candidate himself has downplayed his connection to Biden, even as the President travels to Ohio next week for the groundbreaking of an Intel microchip processing plant, following the passage of a $52 billion bill to build semiconductors in America.

Asked why he doesn’t emphasize his Democratic affiliation, Ryan told CNN: “The Democratic brand as we know … is not good in a lot of these places. And I tell people, ‘Look, I’m an American, you’re an American.'”

In an interview near the border of Indiana, Ryan said he supported Trump’s renegotiation of NAFTA, backed his defense budget and Space Force, and tariffs on China. The congressman said he opposed Biden on forgiving up to $20,000 in student debt for certain borrowers, arguing it “sends the wrong message” to those who didn’t earn a degree.

He noted he ran in 2016 to knock off California Rep. Nancy Pelosi from her leadership post, but he later voted for her ascension to the speakership — an issue bound to come up in attack ads. Asked if he regretted voting for Pelosi, Ryan said, “Well, I mean, look, there aren’t many options.”

“What I want people to know is in this environment, do you have the guts to take on your own party? And from my vantage point, for me it’s a resounding yes,” added Ryan.

Asked if he considered himself a progressive Democrat, Ryan instead said: “To me, it’s about — what are you focusing on?,” pointing to issues like health care and retirement security.

Ryan said his economic agenda and Vance’s cultural agenda are why McConnell’s super PAC is coming to save Vance. Ryan lambasted Vance for his anti-abortion position—the GOP candidate once compared abortion to slavery and has argued against exceptions for rape and incest—and suggested that those in unhappy or “even violent” marriages should stay in it for the sake of their children.

In response to Vice News, which first reported on his comments regarding marriage, domestic abuse and divorce, Vance said “modern society’s war on families has made our domestic violence situation much worse” and that he was “an actual victim of domestic violence.” On abortion, Vance told NBC in July he supported the Supreme Court’s June decision to overturn Roe v. Wade and Ohio’s law to ban abortions after about six weeks of gestation.

Some Republicans have acknowledged that Ryan is a solid candidate but believe that the congressman won’t be able to overcome Vance’s strengths and the conservative nature of the state.

“Tim Ryan is running a good campaign,” said GOP strategist Kristin Davison, who consulted for Vance’s top GOP Senate opponent, former Ohio treasurer Josh Mandel, in the primary. “But voters aren’t going to believe this remake he’s having; A moderate makeover is not going to work because deep down he is a liberal. I think that J.D.’s team on the ground has got him in a great place to succeed—and to deliver the state.”

“Anybody who thought that J.D. Vance, a first-time candidate, would have a cakewalk, that’s not accurate,” said Triantafilou.

Still, some conservatives think it’d be easier if one of Vance’s opponents had won the primary.

“If we had a Jane Timken, or a Matt Dolan, or a [Mike] Gibbons, it’d be in the bag,” said Cunningham.