Why many Republicans are scrambling and scrubbing on abortion 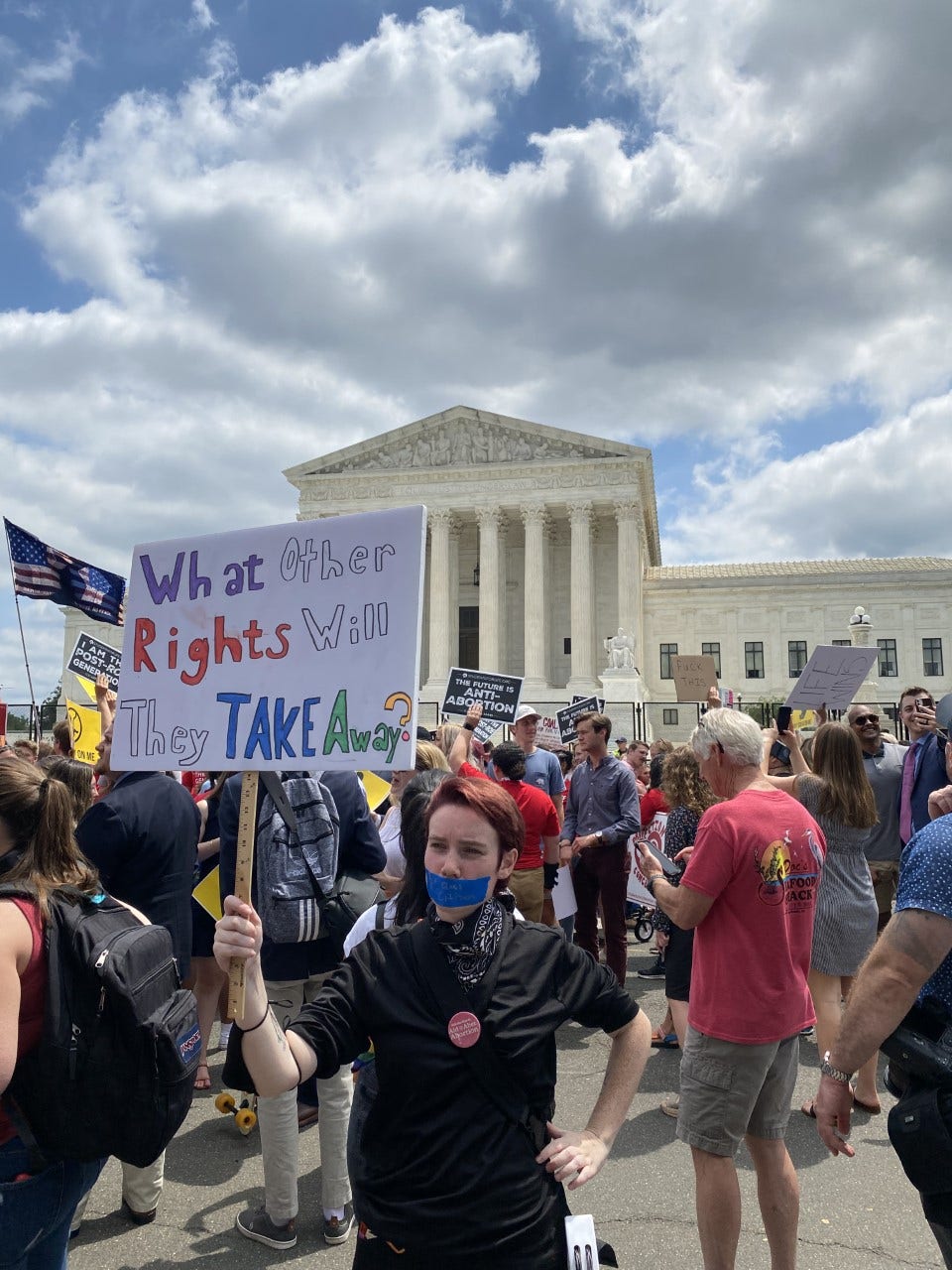 Republicans are still virtually certain to take over the House. The Senate seems a tossup. But there is no question that the abortion issue has changed the midterm playing field.

The relentless media focus on the Donald Trump investigation isn’t helping either, when Republicans want to be talking about inflation and Joe Biden. But there are clear signs that potential Democratic voters are fired up and may turn out in larger numbers in November.

The latest Wall Street Journal poll finds 52% of white suburban women say they would support a Democratic candidate this fall, with 40% saying they would back the Republican. That’s a sharp turnaround, given that the suburbs are where national elections are won or lost. And women are, well, a rather large constituency.

A pro-choice activist holds a sign reading, ‘What other rights will they take away?’
(Fox News Digital)

There’s an even more revealing indication that many in the GOP are retreating on the issue and don’t want to spend the next two months talking about abortion. Some hard-right Republican Senate nominees are softening or scrubbing their position on abortion rights.

BIDEN, TRUMP BOOST EACH OTHER AS MANY ARE EXASPERATED WITH BOTH PARTIES

That is an unmistakable retreat, given the half-century of rhetoric from pro-life Republicans that Roe v. Wade should be eliminated and abortions should be banned. During those decades, that was a free political shot; Roe seemed destined to remain the law of the land, so nobody was really affected (except by court rulings that chipped away at access).

But now the reality of repealing Roe is hitting hard in all 50 states, with a number having already passed bans or near-total bans. And as the results in Kansas demonstrated, even many Republicans aren’t comfortable with a drastic change from Roe, which still has majority support in the polls.

While the media’s early declarations that “Democrats have momentum” may have been overblown, both sides are now confronting a different environment. There’s been a surge in women registering to vote in several key states.

Politico quotes Arizona Republican strategist Chuck Coughlin as saying: “Republicans have to make some kind of leap on the abortion issue. Because they’re getting killed among women.”

Leaping they are, and look no further than Arizona. Politico notes that the Republican Senate nominee, Blake Masters, “led by 8 percentage points among men but was trailing overall because he was getting crushed among women by 22 points.”

Masters moved swiftly. On his website, he had declared that he was “100 percent pro-life.” He had also declared his support for a “federal personhood law (ideally a Constitutional amendment) that recognizes that unborn babies are human beings that may not be killed.”

Then he scrubbed the site, removing all the pro-life language.

In its place: Masters now supporting “a law or a Constitutional amendment that bans late term (third trimester) abortion and partial-birth abortion at the federal level,” along with “pro-life legislation, pregnancy centers, and programs that make it easier for pregnant women to support a family and decide to choose life.”

A very different change in tone.

Or take Marco Rubio, a fierce pro-life advocate, until now.

In an interview with Jackie Nespral of Miami’s NBC affiliate, Rubio sharply softened his tone.

“I have voted and would vote for bills, if I were in the state legislature, that had restrictions because I’m in support of any bill that saves lives,” Rubio said.

“The overwhelming majority of abortions occur outside of some of these commonly discussed,” meaning rape, incest and the life of the mother.”

He added: “I know it’s not a majority position, many people probably don’t agree with me, you probably couldn’t pass it and that’s why Florida did a four-month.” The senator was referring to the state’s April ban on abortion after 15 weeks.

SUBSCRIBE TO HOWIE’S MEDIA BUZZMETER PODCAST, A RIFF ON THE DAY’S HOTTEST STORIES

That step, supported by Ron DeSantis, is also telling. Before the Supreme Court acted, pro-choice advocates regarded that as an outrageous infringement on their liberties.

But after the Dobbs decision, it seems almost a liberal position, or at least a major compromise. And the governor, sensing the sentiment in his state, has made no move toward a more restrictive ban.

There will be plenty of twists and turns between now and the election, but abortion has become an absolute wild card.

Howard Kurtz is the host of FOX News Channel’s MediaBuzz (Sundays 11 a.m.-12 p.m. ET). Based in Washington, D.C., he joined the network in July 2013 and regularly appears on Special Report with Bret Baier and other programs.