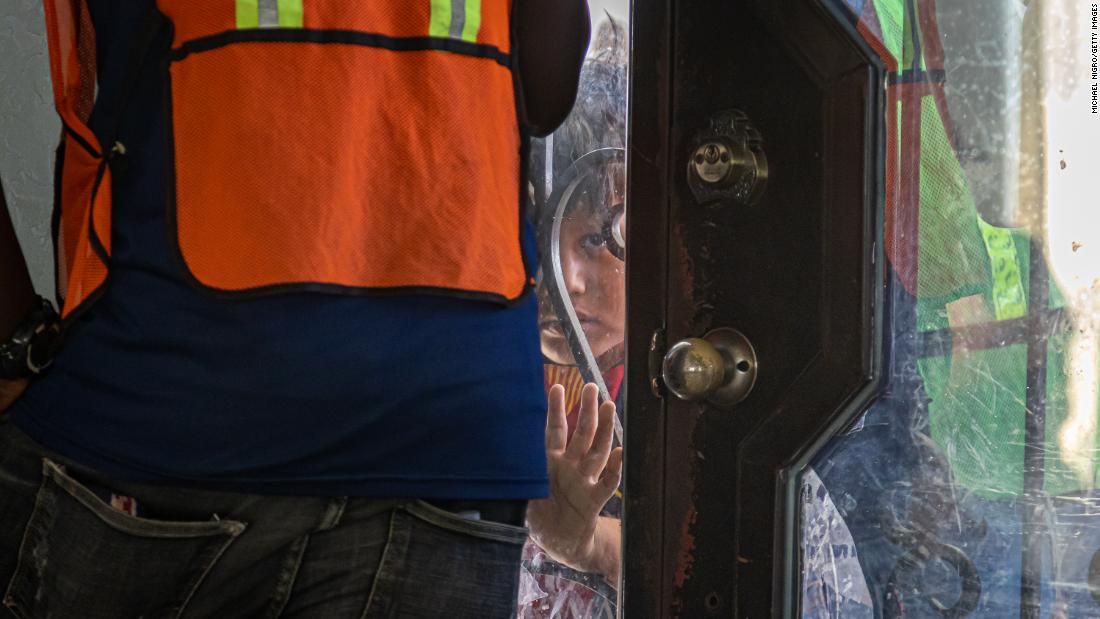 “It’s very difficult,” Silva said with a broken voice. “To stand at the gate and see a mom with a child and say, ‘I’m sorry. I cannot help you.'”

Silva has had to do just that countless times in recent months as thousands of migrants continue to arrive daily to the northern Mexico border city of Reynosa.

Most of the new arrivals are Haitian. Silva estimates that about 12,800 migrants are waiting in Reynosa. At his two “Senda de Vida” shelters, Silva has enough food and tents for nearly 6,000.

Life inside the shelters is about sharing. Thousands share bathrooms, showers, clothes washing stations, clothes lines and cellphone charging stations. Outside the woman’s bathroom, the rules for using the facility are posted in two languages, including reminders to keep the area clean.

Life outside the shelters’ gates is about surviving. Migrants have set up makeshift camps — one is just yards from the banks of the Rio Grande. About 350 people live there, according to Alma Ruth, founder and director of the Practice Mercy Foundation.

Unlike the shelter tents, which are on either concrete or gravel, some of these tents are on the dirt or wood pallets. Migrants there have made makeshift outdoor stoves by placing metal grills over cinderblocks on the bare dirt.

“Many of them have severe health issues and the pregnant women were denied service by the local Mexican hospital,” Ruth said.

Earlier this year, the number of migrants waiting in border communities in northern Mexico, including Reynosa, swelled in anticipation of the end of Title 42, the Trump-era public health order that has been used nearly 2.2 million times to expel migrants out of the US to Mexico and other countries.
In April, more than 7,000 migrants, mostly from Central America and Haiti were waiting in Reynosa for Title 42 to lift.

The result in border cities was staggering to see. Shelters were packed with desperate people. A public plaza at the foot of the international bridge had turned into a tent city, with some migrants sleeping under tarps and not knowing where their next meal would come from. The conditions themselves made migrants — many whom were fleeing violence and extortion in their home countries — easy prey for criminal organizations.

Pamela Rosales, the project coordinator of Doctors Without Borders in the region, called the migrant situation a “humanitarian crisis” due to the overwhelming number of people arriving and the limited resources they have available to them.

“Reynosa is the last stage for people that are coming all the way from different parts of [Mexico and the world] fleeing violence, fleeing poverty, corruption,” Rosales said.

Part of the challenge is the increasingly diverse background of arriving migrants. “We saw a big change in non-Spanish speakers, so even though we do have the resources, we do have a language barrier,” Rosales said.

Some of the most common medical issues her team of 65 personnel — including physicians, social workers, outreach and logistics personnel — are treating include acute upper respiratory, digestive and mental health issues, as well as skin diseases in children that spread quickly in crowded conditions without consistent hygiene practices, like handwashing.

For now, there is no scheduled end for Title 42: A federal judge ordered the Biden administration to keep the controversial order in place in late May.

And the desperation of the people living in Reynosa — at Senda de Vida, on the streets and in makeshift camps — has no clear ending either.

The promise of help and safety

Inside one tent at Senda de Vida, a Haitian couple, Francillon Makenson and Pierre Marie Rose, and their toddler, who shares his father’s name, said they heard about Reynosa through word of mouth during their journey.

For five years, the couple lived in São Paulo, Brazil, where their son, now two and a half years old, was born. For months, they traveled north through South and Central America on foot and by bus.

“We made many friends along the way that stayed in touch with us and one came through here,” Makenson said, speaking Portuguese. “He said in Reynosa there were many organizations that would help us, and also that there were attorneys.”

The Makensons have been at Senda de Vida for one month.

About a dozen other migrants at the shelter told CNN that they also learned from social media platforms, like Instagram and Facebook, that an organization in Reynosa was helping migrants cross into the United States legally.

It’s a fairly common form of online hope — one that often puts the most vulnerable in desperate situations.

Federal immigration authorities also warn that transnational criminal organizations use misinformation to encourage migrants to make the dangerous and costly journey to the US southern border. In June, the Department of Homeland Security said it had launched an unprecedented operation to disrupt human smuggling networks.

Silva says there is some truth to what migrants like the Makensons have heard, but not everyone qualifies for the exceptions to Title 42 that will grant them entry to the US.

CNN reached out to the Department of Homeland Security about this story and did not receive a statement on the record.

For most of the pandemic, exceptions to the controversial rule were rare and only made for vulnerable individuals on a case-by-case basis.

But from May to July, more than 28,000 exceptions to Title 42 were made at six ports of entry, including four in Texas, and one each in Arizona and California. About 42% happened at the Reynosa-Hidalgo international bridge, court records show.

“Given a significant increase in the number of individuals who have presented themselves with situations that warrant humanitarian exceptions pursuant to the terms of the CDC’s Title 42 public health orders, DHS has, beginning July 13, 2022, begun to gradually increase the number of humanitarian exceptions it applies, subject to operational constraints,” the court documents said.

The idea of qualifying for one of those exceptions has filled the sea of tents inside the cinderblock walls of the Senda de Vida with hope.

Francillon Makenson dreams about a job that pays in dollars so he can afford to take little Francillon to the doctor. The toddler can’t retain food, is on a milk diet and has gone undiagnosed for months.

“He’s two years and seven months old and since the trip, he doesn’t talk,” Makenson said. The journey was difficult for little Francillon, who also developed chronic ear infections as well as digestive issues. Pointing to a can of Leche Nido fortified milk, Makenson said it won’t last him a week.

But still, Makenson told CNN he thinks it’s all worth it. “My objective is to go to the United Sates,” he said. “I’m looking for a place that’s safer for my family.”

Other migrants in the shelter also expressed that violence was the reason they fled their home countries. Inside the walls of Senda de Vida is the safest some of them have felt in recent memory.

Like one 14-year-old girl who said she fled the cartel-ridden southern Mexico state of Guerrero with her mother and five siblings. She stopped Silva to share that she was looking forward to going to school. Her mother then told Silva that in Guerrero, children witness kidnappings and killings. The two didn’t share their names with CNN.

A waitlist of thousands

The list of migrants hoping to qualify for a Title 42 exception is thousands long, Silva said. Thousands more are arriving every week and the wait can take months.

Silva’s own list is in order of arrival to the shelter, he explained. The list is also divided into various groups, like singles, families with children and vulnerable populations.

Pro bono attorneys who volunteer at the shelter use his list to help the migrants organize their identification and other documents.

And then the wait continues.

Silva said he buses around 200 migrants with their documents in order to the Reynosa-Hidalgo port of entry every day. From there, he doesn’t know the process, but he says those migrants have not come back to his shelter.

Across the border in McAllen, Texas, Sister Norma Pimentel receives those who qualified for Title 42 exemptions and were processed by US immigration.

The respite center she works at provides migrants with a bite to eat and a place to charge their cellphones.

Pimentel, the executive director of Catholic Charities of the Rio Grande Valley, praised the move by the Biden Administration to allow migrants to seek asylum at ports of entry through an exception to Title 42.

“It’s a great way to allow people to be processed legally, correctly, safely, orderly, and not have people enter through between points of entry,” Pimentel said. “I believe that’s the safest thing for children and mothers … that risk their lives when they enter the river or expose their lives to traffickers that take advantage of them.”

The respite center is located across the street from a Greyhound bus station, where this week CNN observed groups of Haitian migrants walking from the center to the bus station. The ones CNN talked to said they had been at Senda de Vida before entering the United States.

“Two months [at Senda de Vida],” said one of the migrants who only wanted to be identified as a 44-year-old Haitian male. He was headed to Florida; others in the group said they were going to New York.

Pimentel remembers that earlier this year, only several dozen exceptions to Title 42 were allowed per day because she received the migrants at her respite center. This week, Pimentel estimates that between 150 and 200 migrants have stopped by for services per day before heading on their journeys to other parts of the country.

Pimentel says she doesn’t know what the solution is to the surge of migrants waiting at the border, but hopes the governments of Mexico and the United States can help keep them safe.

At Senda De Vida, Silva calls out families by the size of their family units and date of arrival.

An anxious crowd of migrants gathered around him, some carrying their passports in hand and their belongings in suitcases or plastic bags. One little boy had a little plastic construction truck toy under his arm. His face, filled with hope.

Among them was Pierre Marie Rose, Francillon Makenson’s wife, who let out a squeal of joy for her family of three.

Makenson carried little Francillon on his shoulders. Pierre Marie listened intently as Silva announced the next people to get in line at the border were those who arrived in the first week of May.

The Makenson’s didn’t make the cut that day. They arrived in early August.

“First we got encouraged because he said families of three, but then… no, we have to wait,” Makenson said.

This waiting game is giving thousands of migrants hope, but it’s a phenomenon that has Silva — who has been welcoming migrants for a quarter century to Reynosa — conflicted.

So much so, he had these messages for President Joe Biden and to migrants.

To President Biden, Silva said, “We invite him to come and see the migrants.”